The Adventure Series facts for kids

Kids Encyclopedia Facts
This page is about the series of novels by Enid Blyton. For the series by Willard Price, see Adventure series (Willard Price).

The Adventure Series by Enid Blyton, a prolific English children's author, is a series of eight children's novels. These books feature the same child characters: Philip, Jack, Dinah, and Lucy-Ann, along with several adult characters. Jack's pet parrot, Kiki, is also a standard feature in each novel.

The stories show the four children off on their own, discovering and solving mysteries without much adult assistance. Although the publication dates span a decade, Blyton reportedly wrote each of the novels in less than a week.

The colourful dust jackets and line illustrations were by Stuart Tresilian.

(family names are provided based on first appearances) 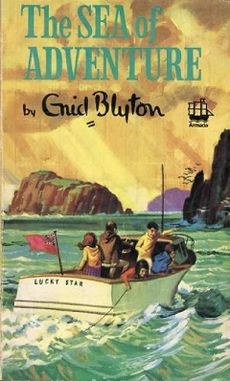 Originally, the series was supposed to end after this episode, but under the great demand of dedicated fans, Blyton wrote two more episodes:

All of the books are in print, and the original editions are expensive collectors' items.

The Island of Adventure

Main page: The Island of Adventure

Philip meets Jack and Lucy-Ann and Jack's pet bird Kiki, and after they sneak home with him, they move in with Philip, his sister Dinah and their Aunt Polly and Uncle Jocelyn at an ancient mansion at the coast. Strange lights on the nearby mysterious island leads to the four's first adventure inside an abandoned copper mine and a network of secret undersea tunnels.

The Castle of Adventure

Main page: The Castle of Adventure

Philip and Dinah's mother takes the four on a summer adventure to a valley in the countryside overlooked by an ominous abandoned castle. When the four go looking for eagles, they find that the castle isn't as abandoned as they were led to believe. They investigate and get caught up in an encounter with a gang of dangerous spies.

The Valley of Adventure

Main page: The Valley of Adventure

When Bill buys a plane, he decides to take the four children for a holiday, but events at the airport lead to the four getting into the wrong plane. When the plane lands they find themselves in an unfamiliar valley scarred by war and, once again, the four children fall into an adventure involving a lost treasure sought by a band of villains.

The Sea of Adventure

Bill takes the foursome on a trip to a Scottish island to help them recover from measles. But amongst the islands, they stumble upon a sinister plot; Bill disappears, and the children are left alone to find out where he is, what is going on and how they will escape.

The Mountain of Adventure

Hoping for a quiet holiday for once, the children, Kiki, Mrs. Mannering and Bill go to a mountain farm in Wales for some wandering. But on the search for the Vale of Butterflies, the children get lost and find themselves near a mysterious mountain. Ominous rumblings from the ground, a pack of wolves roaming the area, a black fugitive, and Philip's disappearance are but a few of the mysteries the children have to unravel about the mountain.

The Ship of Adventure

All the children are aboard for a quiet cruise among the Greek islands. But when Philip's new animal friend, a baby monkey, breaks Jack's birthday present, all the children are plunged into an exciting quest to find the lost treasure of the Andra with some ruthless villains hot on their trail.

The Circus of Adventure

Who is the strange, pompous foreign boy Gustavus Barmilevo invited to the children's home by Bill for the holidays? The children soon discover that he is a prince, named Aloysius Gramondie, and has enemies on his trail. The enemies want to overthrow his uncle, who is too strong a ruler for them, and place the prince on the throne as a puppet ruler. Jack and Kiki find themselves following the others, who are kidnapped and taken to the strange country of Tauri Hessia; but he finds help with a circus. Will Jack be able to rescue the others with the help of his new friends and decide the fate of an entire nation?

The River of Adventure

Recovering from a very bad flu, the four children and their family make a river trip in the Middle East. But there is another reason for this choice of destination: Bill has been asked to watch a crook named Raya Uma. The children soon find another adventure revolving around a magnificent buried city filled with treasure beyond imagination.

In the 1990s, the Adventure Series was adapted for New Zealand television. The main characters were all the same as in the books, but the stories were set in modern times. This did not greatly affect the plot of the stories, though Jack owned a pocket computer which played a significant role in a couple of the adventures, particularly in "The Ship of Adventure". "The Mountain of Adventure" was set in the German Alps, rather than the Welsh mountains as in the books. Also, many of the TV adaptations featured bumbling henchmen for comic relief. Probably the most notable henchman was Ray Uma's henchman, Taj, in "The River of Adventure", who appeared to be more intelligent than his master, and had a major role in the episode's plot. The TV series also introduced a character who was not in the books- Sir George Houghton, Cunningham's rich, underworked boss, who appeared in every episode except "The Valley of Adventure". A running gag was that he always phoned Cunningham with an urgent assignment just as the family were planning a holiday- in "The Ship of Adventure", Bill had to postpone his wedding for this reason- yet Sir George appeared to be a gentleman of leisure. He was only seen doing real work a couple of times in the entire series- he was shown playing pool and golf, and on one occasion, he was seen fishing, though he lied that he was in the office.

The Island of Adventure was adapted into a 1982 British film directed by Anthony Squire, and starring Norman Bowler as Bill along with Wilfrid Brambell and Eleanor Summerfield.

All content from Kiddle encyclopedia articles (including the article images and facts) can be freely used under Attribution-ShareAlike license, unless stated otherwise. Cite this article:
The Adventure Series Facts for Kids. Kiddle Encyclopedia.