The Arboretum, Nottingham facts for kids

Arboretum is a residential area of the City of Nottingham in the county of Nottinghamshire, England. The arboretum from which the neighbourhood takes its name was the first designated public park in Nottingham selected under the authority of the Enclosure Act 1845. 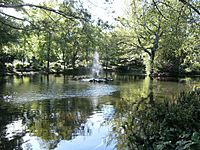 The lake in Nottingham's arboretum

The park was designed as a botanical collection and as a tranquil place in which to relax, forming a major attraction in the heart of Victorian Nottingham. The Arboretum has become one of Nottingham's 'green lungs' and is a Green Flag-winning park. It is the city's oldest public park and also the closest park to the city centre.

There have been many functions held at The Arboretum including the annual Nottingham Pride festival.

English Heritage has designated the site Grade II status on the Register of Historic Parks & Gardens and the park's Bell Tower, bandstand and Circular Aviary have all received Grade II listing protection.

Arboretum is also the name of a ward in the City of Nottingham with a population taken at the 2011 census of 13,321.

All content from Kiddle encyclopedia articles (including the article images and facts) can be freely used under Attribution-ShareAlike license, unless stated otherwise. Cite this article:
The Arboretum, Nottingham Facts for Kids. Kiddle Encyclopedia.