The Bakken facts for kids

The Bakken is a museum located in Minneapolis, Minnesota, founded in 1975 by Earl Bakken, the co-founder of Medtronic. The exhibits present a concise history and explanation of electricity and electromagnetism.

Unique in the world, the Bakken's collection is devoted to inspiring a passion for innovation by exploring the potential for science, technology, and the humanities to make the world a better place. Approximately 11,000 written works and about 2,000 scientific instruments are stored there, some specifically for electrophysiology and electrotherapeutics. The Bakken's former director David Rhees once identified the most significant holdings as works by Jean Antoine Nollet, Benjamin Franklin, Giovanni Battista Beccaria, Luigi Galvani, Giovanni Aldini, Alessandro Volta, Guillame Benjamin Amand Duchenne, and Emil Heinrich Du Bois-Reymond and the journals Annalen der Physik, the Philosophical Transactions and Proceedings of the Royal Society and Zeitschrift für Physik. 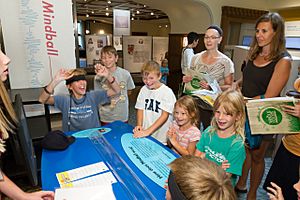 A family playing a round of Mindball at The Bakken Museum

Many of the permanent displays are interactive and suitable for all ages. Exhibits include:

Frankenstein’s Laboratory is an immersive object theater, featuring Frankenstein’s monster. The 12-minute show brings to life the tale of a mad scientist haunted by his creation.

Deep Roots: Plants as Medicine fosters reflection and encourages lively discussion as it delves into modern preconceptions about the relationship between plants and wellness.

Ben Franklin’s Electricity Party allows visitors to try out electric party tricks similar to those conducted by Ben Franklin and other scientists during electricity parties in the 1700s.

Mary and Her Monster See Mary Shelley’s magic bookcase filled with artifacts and books from The Bakken collection, solve the puzzle of Frankenstein’s story illustrated by artist Zak Sally, and meet a living portrait of Mary that allows visitors to hear about the people, science, art and culture that inspired her.

The Florence Bakken Medicinal Garden and a statue of Hermes or Mercury, the messenger god of ancient Greece and Rome, are focal points of the grounds. A newspaper reporter once said the venue, "seems a throwback to another time when skilled craftsmen shaped stone, wood and glass into places with lasting appeal". 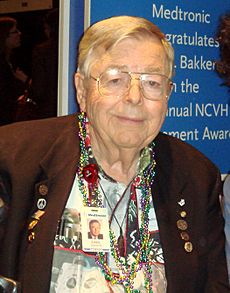 The Bakken was founded by inventor Earl Bakken who was enamored with a movie version of Mary Shelley's work Frankenstein at a young age and grew up to build the first portable and implantable cardiac pacemakers. With his brother-in-law Palmer Hermundslie, Bakken founded the medical technology company Medtronic in 1949. Today the company produces cardiac rhythm, neuromodulation, spinal, biologic, diabetes, ear nose and throat and cardiovascular products and physio-controllers.

At Bakken's suggestion in 1969, Dennis Stillings who at the time worked for Medtronic in its library, began to acquire books and devices. By 1974 the collection was well known among antiquarians and was offered two lots of early electrical devices. At first stored at the Medtronic headquarters in Saint Anthony Village, Minnesota, the collection by 1975 occupied a floor in the Medtronic branch office in Brooklyn Center, Minnesota and in 1976 began to be moved to its present location.

Formerly funded by the museum, the Bakken Quartet performed chamber music on the premises. Today the group is named the Bakken Trio and performs in Saint Paul, Minnesota.

From 1992 to 2015, The Bakken was led by Dr. David Rhees. Upon Dr. Rhees' retirement in 2015, the museum hired museum professional Michael Sanders to be its new Executive Director. 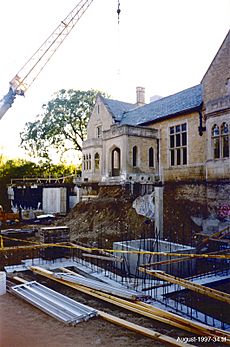 Construction of the museum expansion - August 1997.

Architect Carl A. Gage constructed the building between 1928 and 1930 as the home of William Goodfellow who is said to have wished to impress a female friend. Goodfellow is remembered as the party who sold his dry goods store in 1904 to George Dayton, founder of today's Target Corporation. A combination of 16th century English styles including Tudor and Gothic Revival, the home was named "West Winds" and contains "dark wood interior paneling, open-beamed ceilings, grouped and arched windows and stained glass". The original home had fifteen rooms and eleven bathrooms. When he died in 1944, Goodfellow donated the buildings to the Girl Scouts. The family of Richard Cornelius lived there between 1953 and 1976, after which the house became the Bakken museum.

In November 2019, The Bakken Museum announced plans for a major renovation to the lower-level wing. Renovations will include a new entrance, lobby, museum store, classrooms, and exhibits.

All content from Kiddle encyclopedia articles (including the article images and facts) can be freely used under Attribution-ShareAlike license, unless stated otherwise. Cite this article:
The Bakken Facts for Kids. Kiddle Encyclopedia.