The Cinders facts for kids

The Cinders is a lava field including a volcanic hill named Ice Springs craters in the west-central portion of Utah, United States. It is also known as the Ice Springs Volcanic Field. 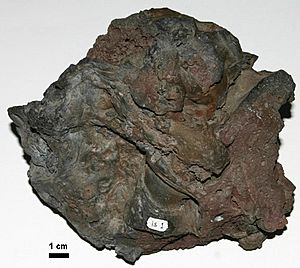 Sample of the basalt of Ice Springs craters 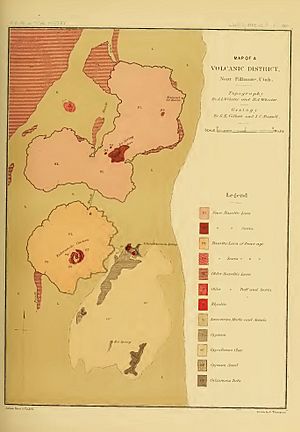 Gilbert and Russell's 1890 Map of the Volcanic District

The Cinders are part of the Black Rock Desert volcanic field. The lava of The Cinders is basalt of late Holocene age. The basalt erupted from the vent at the Ice Springs craters less than 700 years ago (as of 2020). It is the youngest basalt flow in Utah.

To the south is a somewhat older lava flow surrounding Tabernacle Hill.

The basalt of the Cinders and Tabernacle hill was first mapped by geologists Grove Karl Gilbert and Israel Russell in 1890 (see map below). 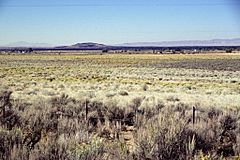 The Cinders, looking southwest towards the central cone

All content from Kiddle encyclopedia articles (including the article images and facts) can be freely used under Attribution-ShareAlike license, unless stated otherwise. Cite this article:
The Cinders Facts for Kids. Kiddle Encyclopedia.