The Deep (aquarium) facts for kids

The Deep is a public aquarium situated at Sammy's Point, at the confluence of the River Hull and the Humber Estuary in Hull, England. It opened in March 2002.

Billed as "the world's only submarium", the exhibits contain thousands of sea creatures (including seven species of shark), 2,500,000 litres (550,000 imp gal; 660,000 US gal) of water and 87 tonnes (96 short tons; 86 long tons) of salt housed in a building designed by Sir Terry Farrell and built as part of the UK National Lottery's Millennium Commission project.

The Deep is also a landmark centre for marine research. A team of aquarists look after the animals in The Deep's collection as well as carrying out research into the marine environment. In 2013, the aquarium was voted the best family place to visit in Hull.

The Deep is a charitable public aquarium dedicated to increasing people's enjoyment and understanding of the world's oceans. 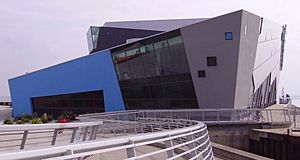 Situated at the confluence of two rivers, Sammy's Point has a history going back at least to the 16th century, when Hull Castle was built on part of the site. Parts of this were made into a new fortification (The Citadel) in 1681. When the Victoria Dock was built in 1850, mud that was dug up for the dock was used to extend the foreshore and create the land that now holds The Deep. Sammy's Point was named for Martin Samuelson, who built a shipyard there in 1857. The land was bought by a succession of owners, all in the ship business, and was then used by the Humber Conservancy as a buoy depot, but was abandoned in the 1980s.

About half of the financing for the aquarium was from the Millennium Commission, with the rest of the £52.285 million for initial construction coming from various other sources. Operational funding is from membership, ticket, and retail sales. The building was designed by Sir Terry Farrell, and constructed by Mero-Schmidlin (UK) PLC: it took 17 months to build and was finished in 2001.

The aquarium opened to the public in 2002. Over eight million people have visited the facility since its opening.

In 2013, the aquarium was voted the best family place to visit in Hull.

The draw for the Third Round Proper of the FA Cup took place on 8 December 2014 at The Deep and was broadcast live on BBC Two.

As part of Made in Hull, the opening season of Hull UK City of Culture 2017 that ran from 1–7 January 2017, Arrivals and Departures was projected onto The Deep. 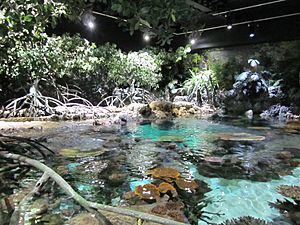 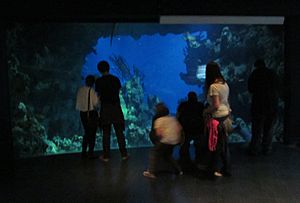 Viewing one of the large tanks

The aquarium uses a combination of hands-on interactive displays, audiovisual presentations, and living exhibits to tell the story of the world's oceans. The museum includes a series of exhibits presenting a chronological journey from the beginning of time through the present day oceans. There is also an interactive area where visitors can learn to control an underwater diving vessel.

Aquaria exhibits include the Tropical Lagoon of Light, teeming with brightly coloured tropical fish and rays, a 10-metre-deep (33 ft) Endless Oceans exhibit containing 2,500,000 litres (550,000 imp gal; 660,000 US gal) of water, Europe's deepest viewing tunnel at 9 metres (30 ft), and a glass lift through the tank. The tank is home to sharks, rays and northern Europe's only pair of green sawfish along with many other fish. The sharks and rays are fed by divers in a daily show. Other marine life on display include fish that glow in the dark, coral, turtles, jellyfish, frogs, penguins, an Amazon flooded forest and many species of insects.

The aquarium's education programme hosts 30,000 primary and secondary school students each year. Some of the themes covered in these programmes include food chains, caring for the marine environment, predator-prey relationships, adaptations, and habitats. The Deep also hosts group sleepovers and a variety of special events during the year.

From 2002 until the Coronavirus Pandemic in 2020, The Deep was also home to the "Two Rivers Restaurant", described as one of the most unusual restaurants Hull has to offer. It was located in the heart of the aquarium. The menu was inspired by locally sourced and sustainable ingredients and diners could watch fish swim past in the tank next to them. In 2020 a message from the company put on their website and social media pages explained "Whilst we have been working hard behind the scenes to prepare The Deep for opening according to current government guidelines, we have unfortunately had to make the sad decision that due to the impact of the Covid 19 pandemic that the Two Rivers restaurant will not be reopening. This decision does not affect our wedding, corporate products and exclusive dine for which we are still taking enquiries and offering virtual viewings."

All content from Kiddle encyclopedia articles (including the article images and facts) can be freely used under Attribution-ShareAlike license, unless stated otherwise. Cite this article:
The Deep (aquarium) Facts for Kids. Kiddle Encyclopedia.