The Dugdale Centre facts for kids

The Dugdale Centre is an arts and business centre in Enfield Town. It contains a 139-seat studio theatre, the Museum of Enfield including local archives, a suite of conference rooms for hire, an Art Gallery and a cafe specialising in locally made Italian Gelato.

The Dugdale Centre forms the Enfield site of Millfield Arts Centre which also includes Millfield Theatre and Millfield House in Edmonton. It is owned, managed and funded by London Borough of Enfield Council.

Between 2008 and 2011 The Dugdale Centre was the temporary home of the Enfield Town Library and then the Forty Hall and the estate administration while they both underwent major refurbishment.

The Dugdale Centre became part of the Millfield Arts Centre family in October 2011. The theatre programme was developed to create a new style of studio work not previously available in Enfield. New programmes of jazz, comedy, mime, poetry, puppetry and children's theatre were developed to complement the larger scale work produced at Millfield Theatre. 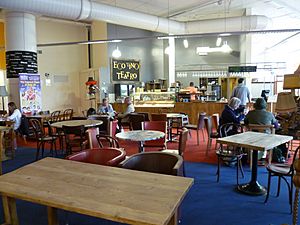 In the Summer of 2012 the first floor was developed into a suite of conference and meeting rooms which opened to the public in November 2012. A new home was also developed for the permanent collection of the Museum of Enfield to sit alongside the local studies and archives.

In January 2013 new wing space and side seating were developed in the Studio Theatre creating larger capacities and more flexible use of the venue.

The Dugdale Centre is home to Ziggy's World Jazz Club, The Enfield Poets, The Museum of Enfield and the Rhythm and Rhyme Poetry and Jazz Club.

The Dugdale Centre is located close in the centre of Enfield Town at the Junction of London Road and Cecil Road. The nearest railway station is Enfield Town and Enfield Chase. The following London Bus routes serve the area:

All content from Kiddle encyclopedia articles (including the article images and facts) can be freely used under Attribution-ShareAlike license, unless stated otherwise. Cite this article:
The Dugdale Centre Facts for Kids. Kiddle Encyclopedia.