The Gap (Sydney) facts for kids 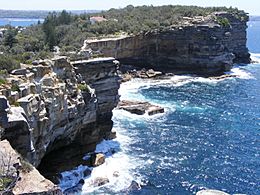 Looking north towards high cliffs that create The Gap near Watsons Bay.

The Gap is an ocean cliff on the South Head peninsula in eastern Sydney, New South Wales, Australia. The area, which faces the Tasman Sea, is located in the eastern suburb of Watsons Bay, in the Municipality of Woollahra, near South Head. 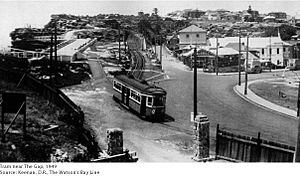 Prior to European colonisation, The Gap was inhabited by the Birrabirragal Aboriginal clan who were part of the coastal Darug people. Shortly after the arrival of the First Fleet in 1788, the British established a makeshift signalling station on the ridge above The Gap. Its role was to give early warning to the colony of any approaching ship. A formal signal station was established in 1790, serviced by a bridle trail that developed into the Old South Head Road by 1811. Pilots based at Camp Cove in Watsons Bay would meet ships at the entrance to Port Jackson in order to guide them safely into Sydney harbour.

In 1871, a year after the official withdrawal of Imperial British forces, the headland around The Gap became a military garrison when work began to build coastal artillery emplacements to defend the Port of Sydney. Construction was undertaken by the colonial government's militia under the command of British military engineers. The first barracks, which were occupied by members of the New South Wales Artillery, were completed by 1877. Extensions were added in 1880 to accommodate additional personnel. Many of the early barracks are still standing near The Gap.

By 1895, the area was being used by the fledgling Australian Army as a gunnery school. In 1942 the Royal Australian Navy had established a radar training school nearby. The facility was initially named HMAS Radar, but was later commissioned as HMAS Watson on 14 March 1945. Torpedo and anti-submarine warfare training were relocated to Watson in 1956. Visitors are sometimes permitted to visit the clifftop chapel that was dedicated in 1962 to service personnel who served at The Gap. The Gap has been part of Sydney Harbour National Park since 1982. In 1990, the area was opened to the public to offer access to the spectacular cliff views and walks.

In 1857 the sailing ship Dunbar carrying 63 passengers and 59 crew struck the rocky cliff at the foot of The Gap. The Dunbar, which was captained by James Green, had left England on 31 May 1857 arriving off Botany Bay shortly after dark on 20 August 1857. In poor visibility and stormy weather, Captain Green misjudged the entrance to the harbour. The Dunbar drove into the rocky cliff at the foot of The Gap causing the ship's topmasts to snap and the ship to turn broadside against the rocks because of the pounding of the waves. The funeral of the Dunbar victims was one of the longest processions ever seen in Sydney. The unidentified dead were buried in a common grave at Camperdown cemetery.

A young sailor named James Johnson was the only survivor. He was rescued after clinging to a rocky ledge below The Gap for 36 hours. Johnson, who was later employed at the lighthouse near Newcastle, rescued another lone survivor from the wreckage of the steamer, SS Cawarra, in July 1866.

The Dunbar's anchor was recovered more than fifty years later and placed on the cliffs at Watsons Bay with a memorial tablet.

The Gap is formed from Sydney sandstone making it part of the Sydney basin. The cliff was laid as sediment more than 200 million years ago in the Triassic period. During the Jurassic era, 40 million years later, a cataclysmic event resulted in an enormous crack forming within the strata. This fault allowed erosion from wave action to create the cliff line around Sydney. Tessellated basalt rock platforms lie at the base of the cliff because The Gap is bordered to the south and west by an older sequence of largely low-grade metamorphic and granitic rocks of the Lachlan Fold Belt. Northwards these rocks pass into the Hunter Region sequence that is transitional between the Sydney Basin and New England Fold Belt. The Gap itself forms a sequence that continues offshore to the edge of the Sahul Shelf. The total maximum thickness of rock formations within the Sydney Basin are in depth ranges of 5,000 metres (16,000 ft).

The rock is a very porous stone. It is composed of very pure silica grains and a small amount of the iron mineral siderite in varying proportions, bound with a clay matrix. The Gap's warm yellow-brown colour is due to oxidation of the stone.

Skinks and eastern water dragons can often be seen moving among the rocks. Seabirds, such as the silver gull and the Pacific gull use the cliff for nesting sites. The sandstone cliff has created nutrient-poor soils similar to those found around Sydney. As nutrients are scarce, plants which survive on The Gap cannot afford to lose leaves to herbivores so they defend their foliage with toxins. Vegetation includes the eucalypts which produces such toxins.

All content from Kiddle encyclopedia articles (including the article images and facts) can be freely used under Attribution-ShareAlike license, unless stated otherwise. Cite this article:
The Gap (Sydney) Facts for Kids. Kiddle Encyclopedia.