The Haven, Boston facts for kids 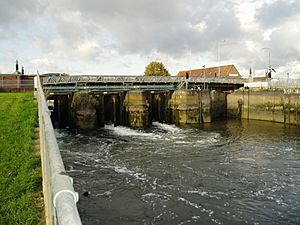 The Grand Sluice at Boston, where the River Witham empties into The Haven. The lock is on the far right.

The Haven is the tidal river of the port of Boston, Lincolnshire in England. It provides access for shipping between Boston Deeps in The Wash and the town, particularly, the dock. It also serves as the outfall into the sea, of the River Witham and of several major land drains of the northern Fens of eastern England, which are known collectively as the Witham Navigable Drains. (TF 337 426). 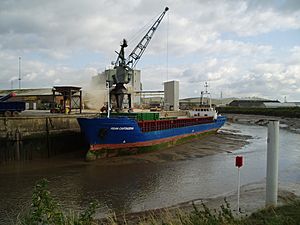 The "Fehn Cartagena" unloading a cargo of stone while moored on a mudbank in The Haven, opposite the Black Sluice

Nowadays, the activity has moved below the old centre of the town. The fishing fleet moors below the railway bridge and trading vessels lie either in tidal berths beside the dock where there are facilities for handling scrap steel or in the dock itself where there are facilities for handling paper, steel coil and grain as well as timber and general cargo, including containers.

Work was completed in 2020 on a tidal barrage in the neighbourhood of the Black Sluice in order to reduce the incidence of flooding in the town and to manage boat access between the River Witham and the South Forty-Foot Drain. The work is authorised by a Transport and Works Act 1992 Order. Originally expected to be completed by 2013, work finally began on the £100 million scheme in 2018.

The Transport and Works Act (1992) was introduced to simplify the process of obtaining permission for the construction or alteration of railways and inland navigations, and any work which interferes with rights of navigation.

In 1607, The Haven, between Boston and the sea (TF 361 402), was the scene of the first, abortive, attempt of the Scrooby Pilgrims, to leave England. Ultimately, in 1620, they became part of the original settlement of Plymouth, Massachusetts.

All content from Kiddle encyclopedia articles (including the article images and facts) can be freely used under Attribution-ShareAlike license, unless stated otherwise. Cite this article:
The Haven, Boston Facts for Kids. Kiddle Encyclopedia.