The InBESTigators facts for kids

The InBESTigators is an Australian children's mockumentary comedy television series created by Robyn Butler and Wayne Hope and broadcast on ABC Me and Netflix outside Australia and New Zealand. The series is produced by Gristmill Productions with Screen Australia in association with Film Victoria and the Australian Children's Television Foundation (ACTF). The series stars Anna Cooke, Aston Droomer, Jamil Smyth-Secka and Abby Bergman as Maudie Miller, Ezra Banks, Kyle Klimson and Ava Andrikides, four fifth grade kids who solve crimes around school or the neighbourhood.

The series premiered on 21 June 2019. Later, a second season premiered on 11 November 2019. The series was nominated for a AACTA Awards in the Best Children's Program Category.

When Ezra Banks meets Maudie Miller, an aspiring private investigator, they form a detective agency run by children. They are joined by two other kids from grade five, Ava Andrikides and Kyle Klimson. Ava brings the social skills and Kyle brings the athletic prowess. Operating out of the headquarters in Ezra's backyard and led by Maudie, they scour through clues to solve a school or neighbourhood mystery in each episode.

Ezra Banks is an 11-year-old boy who studies in fifth grade along with Ava Andrikides and Kyle Klimson. His mother wanted him to be influenced from a special project, and Mr. McGilick says he is taking care of the school's new student, Maudie Miller, and he, Ava and Kyle are impressed with her intelligence that was able to solve a case without question. This brings the four together and merges an investigative agency called The Inbestigators to solve crimes at school and in the neighbourhood. At first, they were underestimated by adults for being children, so they always impress them with their cleverness. In the middle of the season, Maudie loses her special notebook, which she uses for writing the clues for all cases and more things, and gets possessive desperate. Ezra, Ava and Kyle decides to help her remember how she lost her notebook to find it. The case ends when Kyle founds Maudie's notebook inside one of the boxes of Mrs. Parides' sports shed. Then, Maudie gets happy for Kyle. She reveals some photos along with her mum, who died when Maudie was only a child and was one of her last moments before the tragedy.

In the season finale, Maudie is 11 years old and Ava is shocked to realize that Maudie has never had a birthday party. Meanwhile, the Inbestigators set out to solve a case at the behest of Mauide's father Brian Miller, who missed a letter from a conference in Hong Kong. Maudie discovers that it was a case invented by Ezra, Ava and Kyle to celebrate her birthday and at the same time, Ava reveals having a surprise party at Maudie's house and she considered it the best day of her life ever.

The Inbestigators are back with more crimes to solve, more retinas to burn out, and continue to report their adventures at school and in the neighbourhood, which they post in their blog and became together biggest friends. One of these new crimes includes persons being accused of crimes they did not commit. Then, Maudie, Ezra, Ava and Kyle tracks the real culprit for these crimes and the motive for realizing that. Also, one of The Inbestigators continues to being victim of these type of crimes.

In the season finale, Ezra announces that the group will make a commercial, but then, they got interrupted when Ezra's goldfish seems to be missing, and then, they get interrupted for more two mysteries to solve: Sarah Banks, Ezra's mum, lost her ruby earring and a red bucket. Then, it was revealed that Poppy, Amelia and Ezra's dad did accidentally: Poppy painted with some equipments from Ezra and painted with Michelle's paws, Ezra's dad vacuumed Sarah's ruby earring and Amelia put Neil in the bathroom to leave him with more space. After that, they finished their commercial and watch it. 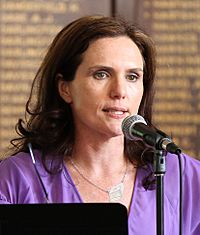 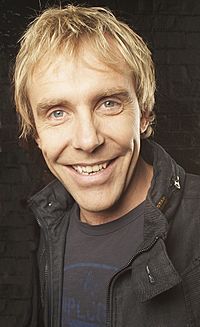 The creators of the series: Robyn Butler (left) and Wayne Hope (right).

The InBESTigators is created by Robyn Butler and Wayne Hope, which are also known for Little Lunch. After the overwhelming success of Little Lunch, Gristmill producers Robyn Butler and Wayne Hope are looking forward to introducing another children's comedy to the world. "We took the comic tone of Little Lunch and married with it the private detective, mystery genre (one of our favourites), inventing a ground-breaking procedural comedy for kids. We are immensely proud of the show that we have produced," says Butler and Hope. Inbestigators EP and ACTF Head of Development and Production, Bernadette O’Mahony says the new series will be a hit with children and their parents.“The Inbestigators is fresh and original, every episode keeps you guessing and smiling. And the characters are just divine – we’ve fallen in love with them and know the audience will too."

The creators added that: "One of the reasons we made the show was as a response to the world we're living in, which is increasingly us and them," Butler explains. "It's so toxic and you can feed your narrative of what you perceive – whether it's the news channels you look at or the Facebook world you exist in – and never really be challenged. We felt that if you just start from the ground up, with a bunch of kids and you put ethnic diversity and gender equity and respect and integrity and kindness in there, you can maybe foster something else in a kid when they're growing up." Joanne Orlando, a researcher in Technology and Learning at Western Sydney University says: ‘Growing up in a world of fake news doesn’t have to be a heavy burden for kids. Rather, it requires extra support from adults to help them understand and navigate the digital world.’

In June 2018, ABC and Screen Australia greenlights The InBESTigators, along with Hardball, 100% Wolf and a second season of Mustangs FC. Screen Australia’s head of production Sally Caplan added: "It’s vital that young Australians are able to see their country, their stories and hear their accent reflected on the screen, so we are incredibly proud to be working with the ABC on this significant slate of children’s programs. "The characters in The InBESTigators, Mustangs FC, 100% Wolf and Hardball are distinctive and inclusive, and tell stories that are innovative and culturally significant. We have high hopes young viewers will connect with these tales and keep enjoying Australian content as they grow up."

Writing for the series begun in 2017. The Inbestigators is written by Robyn Butler, Wayne Hope, Molly Daniels, Lisa Marie Corso, Maddy Butler, Jayden Masciulli and Bob Franklin. The advice Butler and Hope gave to their novice writers was to keep the script simple without dumbing it down, and to never put adult words into a child's mouth: "Rather than writing what was funny or nostalgic for them, they had to get into the bones of a 10-year-old."

“The InBESTigators is going to be a fantastic series – we know from the success of Little Lunch that Wayne and Robyn’s comedy and take on an 11-year-old's world really work for this audience, and to have 40 episodes in this series is unique – it’s been a huge amount of work for Robyn and the script team, but each and every one of the episodes keeps you guessing, and smiling. And the characters are just divine – we’ve fallen in love with them the same way we did with Rory, Debra-Jo, Atticus, Battie, Tamara and Melanie.”

With the scripts all written, all focus turned towards production. With Butler and Hope both directing on the series, the hunt was on to find the lead cast. According to them, it occurred 715 individual auditions for the main cast. In June 2018, was announced the cast for the series, starring Abby Bergman as Ava Andrikides, Aston Droomer as Ezra Banks, Anna Cooke as Maudie Miller and Jamil Smyth-Secka as Kyle Klimson in the main cast. Also, in recurring roles, has Maria Angelico as Miss Tan, James Saunders as Mr. McGilick, Hannah Johnston as Amelia, Clarke Richards as Mr. Barker, Maddy Jevic as Mrs. Parides, Eliza Ong as Poppy Banks, Soraya Briggs as Max, Matilda Hardwick as Caitlin, Sienna Foggie as Esther, Ayiana Ncube as Ruby, Marita Wilcox as Miss Maniaci, Hannah Leigh Struckett as Pixie, Milla Bishop as Miranda, Zakariah Rahhali as Mario, Ethan Pham as Diet, Bailey McMilian-Power as Justin, Monty Henderson as Toby, which first appeared in the second season, and Jack Goodsell as Archie.

The series was filmed beginning on 9 July 2018 at Moorabbin Primary School in Melbourne, Australia, and was pretended to end in December 2018, but filming officially wrapped in November 2018. Dan Maxwell acts as photography director, with Simon McCutcheon acting as production designer. For the studio for the detective agency, the creators wanted originally to create it on the school grounds, but due to not having space on it, they mounted it on a staff car park. During an interview, Anna Cooke says that: "The episodes were not all filmed in order so if we had a bunch of scenes, in say the playground, then we would film them in one go, even if they were in different episodes".

Abby Bergman, during an interview in January 2020, said that: "It’s hard to say because each episode is made up of numerous scenes and each scene is often filmed in different locations on different days. After the end of filming the editors took all of the individual scenes that we filmed out of order and put them together to make each episode. It took 20 weeks to film 40 episodes." Bartley said after 20 weeks of filming, "It really feels like a little family here on set. It’s been a marathon effort, but the kids are just really great." In between takes, the crew voiced words of encouragement – "good job", "great energy – that was awesome" and "you got this – good on you, mate".  When a break was called, the cast and extras hopped on the playground to chat about their holiday plans together. Other cast and crew members played footy together during lunch, and hacky sack in the shorter breaks.

The InBESTigators: Crime Crack is a short web-series released on ABC Me's official YouTube channel starring Abby Bergman and Anna Cooke, who play Ava Andrikides and Maudie Miller, recounting each episode in six steps: the crime, the red herrings, the culprit, the clues, the motive, and the moral of the story. The series was released on 18 July 2019, which only two episodes was released, based on the second and the fifth episode of the first season.

On 13 September 2019, a Cast Q&A Webinar for primary students was announced by ACTF. It premiered on 22 November 2019. Schools from Queensland, New South Wales, South Australia and Victoria participated in their most recent video conference, which featured Anna Cooke, Abby Bergman, Aston Droomer, and Jamil Smyth-Secka – cast members from the popular children's series The Inbestigators. It was released on YouTube on 18 December 2019.

A Study Guide, entitled The InBESTigators Teaching Toolkit, was announced and was released in May 2020 during the coronavirus pandemic.

All content from Kiddle encyclopedia articles (including the article images and facts) can be freely used under Attribution-ShareAlike license, unless stated otherwise. Cite this article:
The InBESTigators Facts for Kids. Kiddle Encyclopedia.