The Magicians of Caprona facts for kids 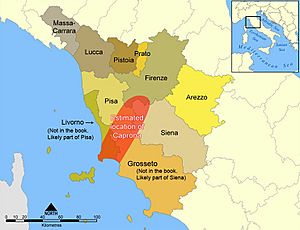 The Magicians of Caprona is a children's fantasy novel by British author Diana Wynne Jones published by MacMillan Children's Books in 1980. It was the second published of seven Chrestomanci books.

It features the venerable Italian family spell-houses Casa Montana and Casa Petrocchi in Caprona, a small independent city-state and duchy.

Caprona is a city-state in the Italy of Chrestomanci's world (World Twelve A), which never united as a nation-state. The houses of Casa Montana and Casa Petrocchi, both renowned for being powerful magician families, have been feuding with each other for generations. The city has begun to lose its "virtue," and the states of Florence, Siena, and Pisa intend to take advantage of this by uniting to conquer Caprona. The only way to save the city is if the true words to the Angel of Caprona, both a hymn and a powerful spell, can be found and read aloud.

The story is told through the eyes of the young Tonino Montana and his brother Paolo. They are both members of Casa Montana, one of two spell-houses in Caprona, the other being Casa Petrocchi. The two spell-houses are deadly rivals; the two families are both convinced that the decline of Caprona is all the fault of the other spell-house, and refuse to work together under any circumstances.

Tonino is, unknown to himself or the rest of Casa Montana, a talented enchanter; however, he is unaware of his ability, and prefers to spend his time reading. Paolo is more outgoing and friendly, and does better at school. When representatives of both houses are called to the Duke of Caprona's palace, they both go. Whilst there, they meet members of the Petrocchi family for the first time, and they also encounter the Duchess, a powerful woman who appears to be the true ruler of Caprona.

The family feud between Casa Montana and Casa Petrocchi is reminiscent of the one between the Montagues and Capulets from Shakespeare's Romeo and Juliet. The Duke of Caprona also makes a reference to the Roman Emperor Nero who, according to legend, played the fiddle (or lyre) while Rome burned. Caprona has declared war and shots are being fired throughout the city and the Duke is looking out the window while singing. He breaks off to comment to a courtier, "Ah, Pollio, there's nothing like a good song while Caprona burns! Nero did it, and now me."

All content from Kiddle encyclopedia articles (including the article images and facts) can be freely used under Attribution-ShareAlike license, unless stated otherwise. Cite this article:
The Magicians of Caprona Facts for Kids. Kiddle Encyclopedia.