The Oa facts for kids

Kids Encyclopedia Facts
This page is about the peninsula in Scotland. For the television series, see The OA. For other uses of the letters OA, see OA (disambiguation). 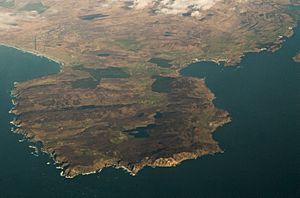 The Oa peninsula, from the air, in 2014. Port Ellen is on the bay in the upper right. Islay Airport is at the top left. 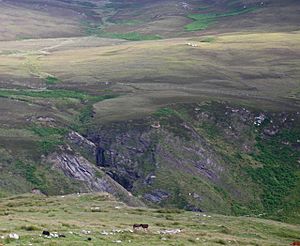 Waterfall at the Mull of Oa

The Oa ( OH) (Scottish Gaelic: An Obha) is a rocky peninsula in the southwest of the island of Islay, in Argyll, Scotland. It is an RSPB nature reserve.

The area is roughly circular, and connects with the rest of the island at a relatively narrow neck, which runs between Kintra and Port Ellen. Its high point is Beinn Mhòr (202 metres or 663 feet) in the south. The Oa had a population of 800 people in 1830, but became deserted due to the Highland Clearances.

The American Monument was erected on the south coast by the American Red Cross to commemorate the loss of two ships in 1918 – the liner Tuscania and the armed merchant cruiser HMS Otranto.

The area around the memorial is an RSPB nature reserve, where chough, golden eagles, corn crakes, and sea birds can be seen. 1,931 hectares (4,770 acres) have been designated as a Special Protection Area for the protection of the chough.

Ireland can be seen from the south coast on a clear day.

All content from Kiddle encyclopedia articles (including the article images and facts) can be freely used under Attribution-ShareAlike license, unless stated otherwise. Cite this article:
The Oa Facts for Kids. Kiddle Encyclopedia.