The Pages facts for kids

Kids Encyclopedia Facts
This page is about the island in South Australia. For the associated conservation park, see The Pages Conservation Park. 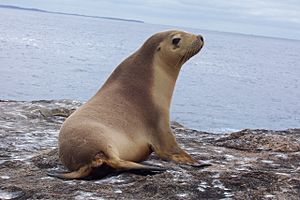 The Pages is an island group in the Australian state of South Australia consisting of two small islands and a reef located in Backstairs Passage, a strait separating Kangaroo Island and the Fleurieu Peninsula. The island group has been located with the protected area known as The Pages Conservation Park since 1972.

The islands were known to the indigenous Kaurna people as Metalong. In Aboriginal lore the islands are those of two women that Nurunderi had saved, but who had subsequently eaten forbidden food and fled him. Nurunderi tracked them for days to the Fleurieu Peninsula where they tried to enter the spirit land, but Nurunderi chanted the song of the winds to raise the sea and sweep the women into the ocean. Nepelle then turned the women to stone and their petrified bodies remain as a warning to women to never eat forbidden food.

They were named “The Pages” by Matthew Flinders on 7 April 1802 from their fancied resemblance to pages guarding their strategic position at the eastern entrance to the strait.

Small pockets of soil on the tops of the islands support patches of vegetation. Recorded plants include variable groundsel, bulbine lily, round-leaved pigface, ruby saltbush and an Atriplex saltbush. Silver gulls breed on the islands, which also support a breeding colony of Australian sea lions. A little penguin colony existed on the South Page island, with an estimated population of 200-400 birds in 1992. In 2009, the population had declined to "few". An account of the island's fauna from 1884 described little penguins as being "very plentiful" on the South Page island, and mentioned the nesting site of a large eagle which was discovered at an "almost inaccessible" location.

All content from Kiddle encyclopedia articles (including the article images and facts) can be freely used under Attribution-ShareAlike license, unless stated otherwise. Cite this article:
The Pages Facts for Kids. Kiddle Encyclopedia.