The Pinnacles (Dorset) facts for kids 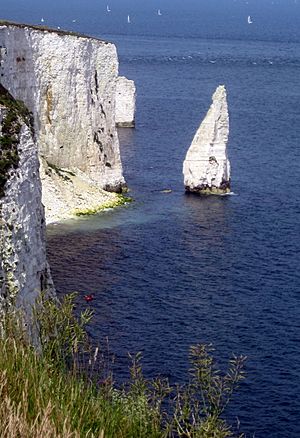 The Pinnacles are two chalk formations, including a stack and a stump, located near Handfast Point, on the Isle of Purbeck in Dorset, southern England.

The Pinnacles lie directly east of Studland, approximately 200 metres south of Old Harry Rocks and about 4 kilometres northeast of Swanage. The chalk headlands of the Ballard Downs are owned by the National Trust. The rocks can be viewed from the Dorset section of the South West Coastal Path.

The downlands of Ballard Down are formed of chalk with some bands of flint, and were formed approximately 66 million years ago. The bands of stone have been gradually eroded over the centuries, some of the earlier stacks having fallen while new ones have been formed by the breaching of narrow isthmuses. Across the water to the east the Needles on the Isle of Wight are usually visible. These are also part of the same chalk band and only a few thousand years ago were connected to Ballard Down.

To form the stacks, the sea gradually eroded along the joints and bedding planes where the softer chalk meets harder bedrock of the rock formations to create a cave. This eventually eroded right through to create an arch. The arch subsequently collapsed to leave the stacks called The Pinnacles.

All content from Kiddle encyclopedia articles (including the article images and facts) can be freely used under Attribution-ShareAlike license, unless stated otherwise. Cite this article:
The Pinnacles (Dorset) Facts for Kids. Kiddle Encyclopedia.