The Point, Cardiff facts for kids 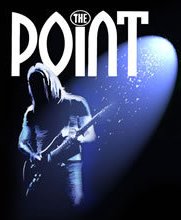 The Point was a music venue in Cardiff Bay, Cardiff, Wales, located in the deconsecrated Grade II-listed St Stephen's Church. 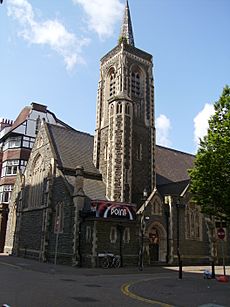 The Point was situated in the old merchant's quarter of Mount Stuart Square. The focal point of the square was St Stephen's church, that would later be turned into The Point.

The church was designed by architect E. M. Bruce Vaughan and constructed between 1900-2 to replace a temporary iron frame church and opened as the chapel of St. Mary's. In 1912, it became a separate parish under the name of St. Stephen. The church was designed in a Gothic style, the interior dominated by a single nave with six bays of pointed arches and an arch-braced roof. The exterior includes a bell tower at the northeast corner with an octagonal spire.

In May 1975 it became a Grade II listed building, presently listed as "The Point (Formerly St Stephen's Church)". The parish was deconsecrated in 1992.

All content from Kiddle encyclopedia articles (including the article images and facts) can be freely used under Attribution-ShareAlike license, unless stated otherwise. Cite this article:
The Point, Cardiff Facts for Kids. Kiddle Encyclopedia.