The Strand Station facts for kids

The Strand Station, also referred to as Auckland Strand Station, is a railway station located on the eastern edge of the Auckland CBD. It currently serves as the northern terminus of the Northern Explorer long-distance service between Auckland and Wellington, operated by The Great Journeys of New Zealand. Suburban services do not pass through the station, but it can serve as a backup for Britomart Transport Centre, the city's main railway station since 2003, during times of disruption.

The Auckland Railway Station was opened in 1930 on Beach Road, replacing the previous railway terminus which was on the Queen Street site where Britomart now exists. The 1930 station was the third to serve as the rail terminus for Auckland, and remained the sole station serving the CBD until its closure in July 2003, when Britomart became the new terminus.

The Strand Station uses some of the platforms that were retained when the Auckland Railway Station building closed. The original Platform 7 (now referred to as Platform 1) was retained for excursion use as 'The Strand Station', named after the nearby street. It continued to be used by a limited number of peak-hour suburban trains for a few months following the opening of Britomart. Following this, the platforms remained abandoned until August 2011 when two platforms were re-developed to prepare the station for possible use during Rugby World Cup 2011, although they were never used for that purpose. These platforms have been used for Northern Explorer services from December 2015 onwards. 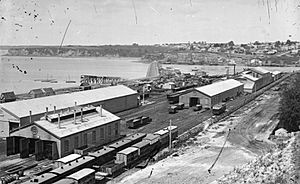 Railway yards at Mechanics Bay, 1880s; the bay would be reclaimed for Auckland Railway Station and yards over the next 40 years 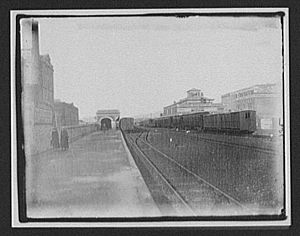 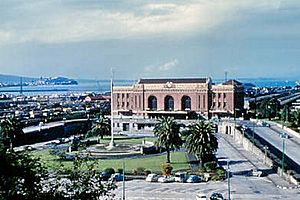 Auckland Railway Station, Beach Road, around 1960. Platforms run off diagonally at right from the rear of the building 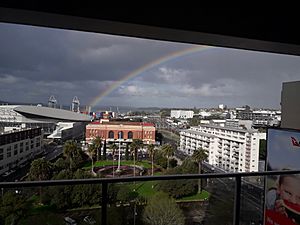 Former Auckland Railway Station on Beach Road. It has since been converted to apartments. As of 2017, the site is called the Grand Central Apartments Auckland

The Auckland Railway Station was built by the New Zealand Public Works Department between 1928 and 1930 and sits on reclaimed land on Beach Road close to the wharves. It replaced a smaller terminal on the site of Britomart. The grand and ornate building was intended to serve as a gateway to the city, and its construction cost of £320,000 was the largest independent contract awarded in New Zealand. It has great historical importance for its associations with the public building programme of the 1920s, and with the central role played by the railways in national transport.

The Auckland Railway Station building has been a city landmark from the time it was opened in 1930, and is a grand architectural statement in beaux-arts brick and mortar, having been called "one of the most self-consciously monumental public buildings erected in early twentieth-century New Zealand". The building was designed by William Henry Gummer (1884–1966), a student of Sir Edwin Lutyens and architect of various notable New Zealand buildings such as the Dilworth Building in Queen Street.

The symmetrical facade of the three storey-high building was constructed of reinforced concrete, faced with brick and Coromandel granite. It is approached by a sweeping ramp on either side of the building, enclosing a landscaped garden immediately to the front. The building's design echoed American models, such as Union Station in Washington, D.C. and Pennsylvania Station in New York City, considered the most striking and luxurious examples of the time. It has also been favourably compared with Grand Central Terminal, in New York City as well, and the National Theatre in Melbourne.

The station was given ornate public spaces and a wide variety of amenities, from waiting and dining rooms to shops and a first aid station. Of particular interest is the magnificent metal ceiling in the main lobby, this item was manufactured in Germany and the parts shipped out and reassembled to create one of the most remarkable structures in the country. The looming threat of German aggression meant that its origins were quickly downplayed and obscured. The rest of the lobby is a showpiece of expensive imported marble and fine bronze detailing with a beautiful terazzo floor. The fine detailing extended to the restrooms with imported panelling, light fittings, period-style furniture and porcelain sanitaryware.

Underpasses and ramps linked the station building with an extended platform network to the rear, built with elegant concrete canopies and other elements as integral parts of the original design and function. With modifications, the building was used as the main point of arrival for rail passengers in Auckland for most of the century.

The station building was sold during the privatisation of part of the New Zealand Railways Corporation during the 1990s, partly because of the impending construction of Britomart Transport Centre, which would become the new railway station for the city centre. Although sold, the station remained open until July 2003 when Britomart was opened. A single platform remained in use to serve a limited number of peak-hour suburban services which continued to operate for several months after the opening of Britomart. In the decade that followed, the platform was occasionally used by excursion trains although, along with the rest of the platforms, it became largely dilapidated. 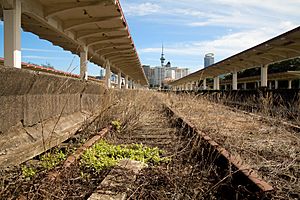 The abandoned platforms at The Strand in 2008.

In 1999, the station building was partly converted for use as student accommodation for Auckland University and named The Railway Campus. It was the largest of the university's residences, and had 426 bedrooms, in a total of 230 apartments. The residence was awarded four stars by Qualmark in the Student Accommodation category, which evaluated the facilities as well as the level of pastoral care and support for students, and was accredited by the New Zealand Association of Tertiary Education Accommodation Professionals.

In 2007, major weather-tightness problems appeared. Tenants were required to leave while a multi-million dollar restoration programme was undertaken. The effect of the water leaks on the prices of the apartments in the complex was marked – while the high price in the early 1990s was $160,000, apartments sold for a nominal sale price as low as $12,800 (with most going around $20,000) as owners extricated themselves from the problem investment. In November 2008, the university announced that it would no longer be using the building for student accommodation, due to weathertightness issues and associated works. Values had by early 2010 recovered to an average sale price of $55,000. 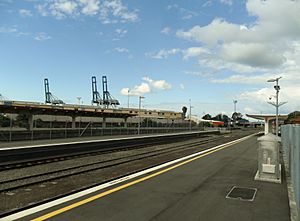 The Strand Station in its refurbished state 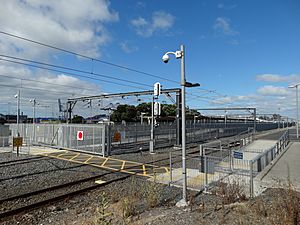 Between 2003 and 2011, the platforms had deteriorated into a decrepit state. All of the platforms had been shortened for the Britomart Curve, sections of removed track were stacked up on top of each other adjacent to the platforms, and grass and weeds covered most of the site.

In 2011, two platforms were upgraded by Auckland Transport to prepare them for use as an alternative to Britomart for the 2011 Rugby World Cup. In a $1.7 million project, the canopies were removed from two platforms, with a small section left behind for historic purposes, and the canopies on the other platforms were also left standing due to their heritage value. The platforms were resurfaced, and amenities such as lighting and a public address system were installed. The platforms did not end up being used during the 2011 Rugby World Cup, but they continued to serve as a potential backup station for Britomart during disruptions.

During 2013, stabling facilities were constructed in the disused part of the station, to the north of the refurbished platforms. The stabling yard, officially called the Strand Distributed Stabling Facility, is designed to hold trains when they are not in service. In 2014, the station was fully electrified as part of Auckland's railway electrification project. In December 2015, the station became the terminus of Auckland's sole long-distance passenger train service, the Northern Explorer which runs between Auckland and Wellington, following the shift of its Auckland terminus from Britomart. As the Northern Explorer had become the only diesel service still using Britomart, its operator KiwiRail was requested by Auckland Transport to fund an upgrade to the diesel extraction fans at the underground station, but KiwiRail decided it would be more cost-efficient to cease serving Britomart and move the Northern Explorer terminus to The Strand instead.

The Strand Station is currently served by the thrice-weekly Northern Explorer long-distance service to Wellington. It is occasionally used for excursion trains and is also available as a backup station for Britomart in case of disruptions. Since electrification, part of the station has been used as a stabling facility. Platform 8 restaurant occupies the foyer of the 1930 station. 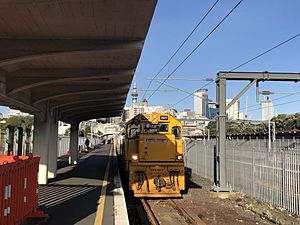 Strand Station, Auckland, in 2019 showing the section of the concrete canopy, which escaped demolition in 2011

Some groups and campaigners have suggested that the station could be utilised for future long-distance passenger services such as the re-instated Te Huia to Hamilton, in order to circumvent the issue of the lack of capacity for long-distance services at Britomart. The Northern Explorer is hauled by diesel locomotives and can no longer enter Britomart station because the ventilation system for diesel locomotives has been removed.

Te Huia may extend to The Strand in 2024 provided the Third Main Line project is sufficiently advanced. It may also run on Sundays and public holidays after year 4 or 5; once track access in the Auckland area is not required on Sundays for key rail projects.

All content from Kiddle encyclopedia articles (including the article images and facts) can be freely used under Attribution-ShareAlike license, unless stated otherwise. Cite this article:
The Strand Station Facts for Kids. Kiddle Encyclopedia.