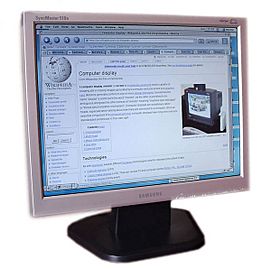 A thin film transistor liquid crystal display (TFT-LCD) is a technology which is used in LCD monitor and television displays. TFT technology can be used to give one of the clearest pictures of any flat screen display and it uses much less electricity than older screens. TFT displays are very fragile because they are made as thin and light as possible but this means they need far less space tWidescreen Displays (which have an aspect ratio of 16:9) are becoming the most popular form of television and monitor displays. Standard format (which have an aspect ratio of 4:3) was the most popular for a long time.

The number of pixels in a display screen is called the resolution. The word resolution means the solution of a problem. Better resolution on a display screen describes how detailed a picture can be displayed. Each pixel is another detail on the screen. This is normally described as two numbers, (width) x (height).

TFT dislays are also known as flatscreen, flat-panel, and liquid crystal display (LCD) but these types are not always TFTs.

Most display screens have hundreds of thousands of pixels. Each pixel has to be set to the right colour (most display screens are capable of 16 million colours in each pixel). To make a clear picture, the screen might need to make millions of calculations. Any group of pixels that change to the same colour can be changed with one calculation, making the calculations much smaller. For example, if the picture to display was just a white screen, the screens processor would only calculate the colour once and use the same calculation for the whole screen. Changing one pixel at a time would take many more calculations. If the same picture was shown many times on the screen, the processor would calculate the picture once and then repeat it in whatever position and in different sizes, if needed. The processor can make very complicated calculations, but in the end it does less work. This is called rendering technology. Rendering technology in the most modern displays is like making a mosaic.

TFT response time is measured as the average time it takes to change the pixels from one shade of grey to another shade of grey.

Changing a pixel between colours takes more time than changing from black to white on a display screen. TFT is very fast for changing between colours which is more important for movies and games. 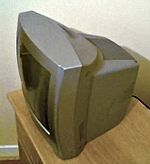 At one time, there were some positive advantages of CRT displays, which are no longer true:

TN is an abbreviation for Twisted Nematic. This is a new kind of TFT technology. They offer higher resolutions (more pixels). TN panels have a lower response time (they react faster).

Since this article was written, there have been further developments in the technology of producing LCD displays. For more info, the main Wikipedia page on Computer Monitor may have more up-to-date and further details.

All content from Kiddle encyclopedia articles (including the article images and facts) can be freely used under Attribution-ShareAlike license, unless stated otherwise. Cite this article:
Thin film transistor liquid crystal display Facts for Kids. Kiddle Encyclopedia.