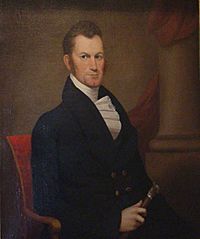 Thomas Bibb (May 8, 1783 – September 20, 1839) was the second Governor of Alabama. He was born in Amelia County, Virginia in 1783. Bibb was president of the Alabama Senate when his brother, Governor William Wyatt Bibb, died in office on July 10, 1820. The new state constitution specified the president of the senate was next in line as governor. So he took over the rest of his brother's term of office. Bibb served as acting Governor from July 25, 1820 to November 25, 1821. He decided not to run for the governorship again. Bibb was elected to the Alabama House of Representatives in 1828 and 1829. He was the director of the Huntsville branch of the Alabama State Bank. Bibb was married to Parmelia Thompson.

All content from Kiddle encyclopedia articles (including the article images and facts) can be freely used under Attribution-ShareAlike license, unless stated otherwise. Cite this article:
Thomas Bibb Facts for Kids. Kiddle Encyclopedia.