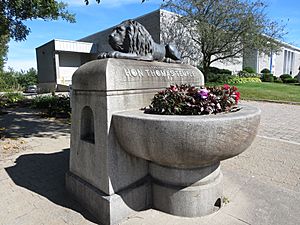 The Thomas Temple Fountain in Fredericton, New Brunswick with the Beaverbrook Art Gallery in the background

The Thomas Temple Fountain was a cast-iron and granite drinking fountain for "man and beast" in Fredericton, New Brunswick, Canada. It no longer functions as a fountain but remains in place as a work of public art. It is located at the north end of Queen Street, just west of the Beaverbrook Art Gallery. The Temple Fountain was added to Fredericton's Local Historic Places Register in June 2011.

Senator Thomas Temple presented the fountain to the city in 1899, for the use of horses, dogs and humans. The upper trough, which now is used as a flower planter during the summer months, provided water for horses, while dogs used a cast-iron bowl at the base of the fountain. People drank from cups chained in the niches on either side of the structure.

Senator Temple bought the fountain's cast-iron elements in Ottawa, and the granite was quarried and carved in New Brunswick. The stone came from a quarry on Spoon Island in the Saint John River near Hampstead and the firm of Tayte, Meating & Co. in Saint George built the fountain.

All content from Kiddle encyclopedia articles (including the article images and facts) can be freely used under Attribution-ShareAlike license, unless stated otherwise. Cite this article:
Thomas Temple Fountain Facts for Kids. Kiddle Encyclopedia.