The Beaverbrook Art Gallery is a public art gallery in Fredericton, New Brunswick, Canada. It is named after William Maxwell "Max" Aitken, Lord Beaverbrook, who funded the building of the gallery and assembled the original collection. It opened in 1959 with over 300 works, including paintings by J. M. W. Turner and Salvador Dalí. The Beaverbrook Art Gallery is New Brunswick's officially designated provincial art gallery.

The building has undergone several expansions, the latest of which opened in 2017 via a design by Halifax-based MacKay-Lyons Sweetapple Architects. Former director Terry Graff stated that this "expansion and revitalization" aimed to make the gallery "an important destination for national and international contemporary art". 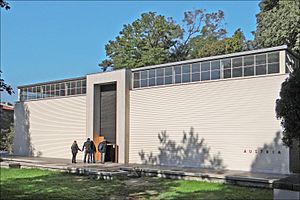 The simplified Classical symmetry of the building echoes such earlier works as Josef Hoffman's Austrian Pavilion (shown above), built for the 1934 Venice Biennale

In 1954 Lord Beaverbrook made an offer to Hugh John Flemming, the Premier of New Brunswick, to build and stock an art gallery in Fredericton. The Province accepted the proposal, and provided him with a site directly across from the New Brunswick Legislative Building on the southern bank of the Saint John River. Neil Stewart, of the Fredericton architectural firm Howell & Stewart, designed the mid-century modern building as a flat-roofed single-storey structure, faced with pale semi-glazed brick. It has a granite base, with cornices and a frieze of white marble quarried at Philipsburg, Quebec. The original exhibition space consisted of a high-ceilinged central gallery with a square gallery on either side.

In 1983 the building was expanded with the addition of east and west wings. These additions, funded by Marguerite Vaughan and the Beaverbrook Canadian Foundation respectively, housed the Hosmer Pillow Vaughan collection of china and other decorative arts, and the Sir Max Aitken Gallery. In 1995 another expansion, housing the Marion McCain Atlantic Gallery, was opened. Its name honours the late wife of New Brunswick businessman Harrison McCain, who contributed $1 million to the project. 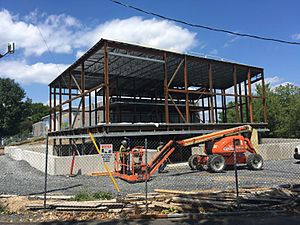 Work on the expansion for the Beaverbrook Art Gallery, July 2016. 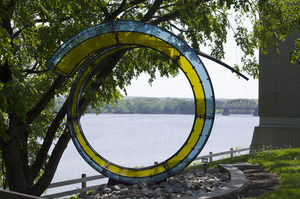 The sculpture Arriving Home, by Dennis Oppenheim, situated at the TD Sculpture Garden.

On 20 May 2015, the Beaverbrook Art Gallery unveiled plans for a large expansion project following a 6-year $25 million fundraising campaign. The expansion includes a substantial increase to gallery space, an artist-in-residence studio, a learning theatre, a café, and an outdoor sculpture courtyard. It also features new mobility access features, including an elevator and ramps. Construction of the new pavilion began in October 2015. On 20 July 2016, the Gallery announced that it was increasing its fundraising goal from $25 million to $28 million after an outpouring of generosity from private donors and government sources. The increased capital will allow for more amenities as well increased programming and more. Construction of the new pavilion was completed in October 2017, making the Beaverbrook Art Gallery the largest art gallery in the Atlantic region.

In 2009 a sculpture garden was inaugurated adjacent to the Gallery. The first sculpture to be commissioned was The Birth of Venus by New Brunswick Acadian artist André Lapointe. In 2012 the Gallery received a $300,000 donation from TD Bank Group to support the initiative, which was named the TD Sculpture Garden.

A sculpture by Marie-Hélène Allain (Awakening/Éveil) has been on display on the lawns in front of the Gallery since 1985. In October 2015 the Gallery acquired the sculpture Arriving Home by American sculptor Dennis Oppenheim. The sculpture was installed permanently in the TD Sculpture Garden behind the Beaverbrook Art Gallery near the Saint John River. On September 16, 2016, the Gallery unveiled the installation of a newly acquired work by Sorel Etrog titled King and Queen.

The gallery opened with a collection of more than 300 paintings, mostly British, and assembled by Lord Beaverbrook. Most of the works had been purchased by Beaverbrook himself, with the help of advisors, including Sir Alec Martin, managing director of Christie's, W.G. Constable, curator of the Boston Museum of Fine Arts, and Lady Dunn, the widow of the industrialist and art collector Sir James Dunn. Lady Dunn became Lady Beaverbrook when she married Lord Beaverbrook in 1963, a year before his death.

According to news reports in 1959, the total value of the collection was $2,100,000. It included works by J.M.W. Turner, John Constable, Thomas Gainsborough, Joshua Reynolds, Edwin Henry Landseer and other 18th- and 19th-century British artists. Beaverbrook had also acquired works by contemporary artists with whom he was personally acquainted, including Augustus John, William Orpen, and Graham Sutherland. Acting on the advice of Le Roux Smith Le Roux, he bought several paintings from the 1955 Daily Express Young Artists Exhibition, which Le Roux had organized. These included Lucian Freud's Hotel Bedroom, which won second prize in the exhibition. 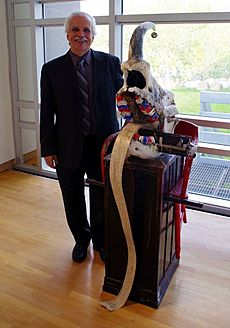 In addition to Lord Beaverbrook's own acquisitions, the Gallery had received two major donations of artworks before its opening. Toronto businessman James Boylen donated 22 paintings by Cornelius Krieghoff. Lady Dunn donated three portraits by Walter Sickert and three works by Salvador Dalí. Two of the Dalí paintings were portraits of Lord and Lady Dunn, while the third was the very large painting Santiago El Grande, which was on display in the central gallery when the Beaverbrook Art Gallery opened and has become closely identified with the Gallery. This painting, which measures 13 by 10 feet (400 cm × 300 cm), and represents Spain's patron saint James the Great on a white horse, had been created for the Spanish Pavilion at the 1958 Brussels World's Fair.

In recent years, the Gallery has been expanding its collection to include a wider selection of modern and contemporary Canadian and International art. In 2015 and 2016 the Gallery acquired more than 2000 additional works of art for its permanent collection, representing an outpouring of generosity from donors nationwide. Notable Canadian artists that have been to the collection include Robert Scott, Denis Juneau, Jacques Hurtubise, IAIN BAXTER&, and Oscar Cahén. Internationally, the Gallery has acquired works by many Modern and Contemporary artists including Dennis Oppenheim, Hans Hofmann, Barbara Astman, Jean-Paul Riopelle and Edward Kienholz. The Gallery has also acquired many works by well-known First Nations artists including work by Carl Beam, Anong Beam, and Rebecca Belmore.

This large increase in value would entail a corresponding rise in the cost to the Foundation of insuring the works, and would in turn reduce the amount the Foundation could devote to its charitable causes in England. In 2003 the Foundation, which was headed by Lord Beaverbrook's grandson Maxwell Aitken, proposed to take back and sell the two most valuable paintings, The Fountain of Indolence and Hotel Bedroom. It would use the proceeds to pay the considerably reduced insurance premiums on the remaining works and to fund its causes in England. The Foundation would give the Gallery $5 million for its endowment fund, and guarantee that the remaining works would stay in the Gallery for at least the following ten years. This would have required the Gallery's directors to acknowledge that the paintings belonged to the Foundation, which they refused to do. In July 2004 the Gallery and the Beaverbrook U.K. Foundation submitted the case to arbitration under the New Brunswick Arbitration Act, agreeing that the case would be heard by retired Supreme Court of Canada justice Peter Cory.

The dispute proceeded to arbitration, and Cory issued his arbitral award on 26 March 2007. Of the 133 disputed paintings, 85 were ruled as being gifts from the original Lord Beaverbrook, while 48 paintings were to be returned to the custody of the Beaverbrook U.K. Foundation. Cory also ruled that the Foundation had to pay the Gallery $4.8 million in legal costs. The Foundation appealed the award pursuant to a process agreed on by the parties, in which a panel of three retired Canadian judges (Edward Bayda, Coulter Osborne and Thomas Braidwood) heard the appeal. On 9 September 2009 the panel confirmed the original award that divided the paintings between the two parties. The Fountain of Indolence and Hotel Bedroom were among the works that stayed in the Gallery's possession. The appeal panel made no order on the legal costs for the appeal, so this matter remained outstanding. Then, a month after the appeal ruling, the Foundation announced that it would seek to have New Brunswick's Court of Queen's Bench overturn the decision; this in turn got the attention of the Charity Commission for England and Wales, the regulator of philanthropic organizations, which began "pursuing inquiries with the foundation's trustees in connection with ... the foundation's governance and financial affairs, [including] the trustees' pursuit of the litigation against the gallery." On 15 September 2010, the parties announced that the matter was finally settled by private agreement. They maintained the original 85/48 split of the disputed art works and said that they had also agreed on the allocation of legal costs; in a 2013 Afterword to his book on the dispute, New Brunswick author Jacques Poitras reported on speculation that the agreement would see the Foundation avoid paying the Gallery's costs, and that in exchange the Gallery would get a share of the proceeds when the Foundation sold the 48 works that were to be returned to it.

All content from Kiddle encyclopedia articles (including the article images and facts) can be freely used under Attribution-ShareAlike license, unless stated otherwise. Cite this article:
Beaverbrook Art Gallery Facts for Kids. Kiddle Encyclopedia.