The Thursford Collection is a museum located in Thursford, Norfolk. Founded by local man George Cushing, it is now known for the scale of its collection of steam engines, organs and fairground attractions, and its annual Christmas spectacular show, which draws over 100,000 people to the Norfolk countryside.

The Thursford Collection is a registered charity under English law.

George Thomas Henry Cushing MBE was born at Thursford on 25 March 1904, the son of a farm labourer. After leaving school aged 12, he became a farmhand, but had developed a childhood fascination with steam engines. In 1920 he travelled to the King's Lynn Mart, and got a job driving a steam roller. Having bought a 1913 Aveling and Porter roller from the local council with savings of £225, Cushing set up his own sub-contracting business, which had expanded to 15 steam rollers and a steam wagon by World War II.

By the late 1930s, steam was on the wane from commercial usage as diesel lorries became more popular. To Cushing, it was "as though the crown jewels were being sold for scrap", and he began to buy up redundant steam engines, storing and then restoring them at Laurel Farm, where he had worked as a child and now owned. This was also where he raised his own family of three boys with his wife Minnie. 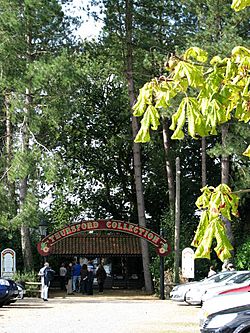 Entrance to the Thursford Collection (September 2007)

As Cushing's collection grew, more enthusiasts travelled to Thursford to help restore and then view his collection. Thus, in the 1970s Cushing opened his museum in what was then a series of old farm sheds, and would personally tour the audience between exhibits, most often dressed in a countryman's flat cap, tweed jacket and muffler over baggy jumper, trousers and gumboots. He would then shake each visitor's hand, and ask departing guests with a blunt "Did yer loik it, then?"

The original museum had limited opening times, but Cushing expanded the attraction to include a gift shop and tea rooms, and opened seven days a week during the summer season. In 1982 he co-wrote, with Ian Starsmore, Steam at Thursford. For the scale of his efforts in saving much of Britain's steam heritage, Cushing was appointed an MBE in 1989.

The collection today includes a Mighty Wurlitzer which is the fourth-largest in Europe, and has a total of 1,339 pipes. The Wurlitzer was rescued from the Paramount Theatre / Odeon Cinema Leeds. There is also a 19th-century gondola merry-go-round which was built in the Norfolk factory of Frederick Savage, decorated with carved heads depicting Queen Victoria and her family, including the German Kaiser Wilhelm II.

All content from Kiddle encyclopedia articles (including the article images and facts) can be freely used under Attribution-ShareAlike license, unless stated otherwise. Cite this article:
Thursford Collection Facts for Kids. Kiddle Encyclopedia.