Kids Encyclopedia Facts
This page is about the museum. For the ballad, fairs, and other uses of the term, see Scarborough Fair.

The Scarborough Fair Collection is a museum of fairground mechanical organs and showman's engines, located in Scarborough, North Yorkshire, one of the largest collections of its type in Europe.

The museum was founded by local Farmer turned entrepreneur and owner of nearby holiday park), Graham Atkinson, who wanted to both indulge his passion for fairgrounds and entertain his holiday park clients. Starting his collection in the late 1980s, the attraction was occasionally open to holiday park residents and enthusiasts until its formal opening in 2008. 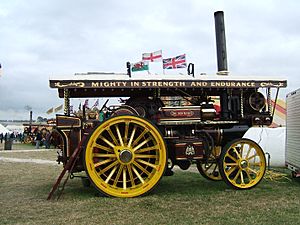 The Iron Maiden at the Great Dorset Steam Fair, 2007

The collection spans vintage cars, miniature vehicles and model railways, but the three cores to the collection are:

There are two theatre organs that feature during open days and weekly Wednesday afternoon tea dances from 13:00. Both instruments are "Mighty" Wurlitzers of 3 manuals and 8 ranks (of pipes) with specifications:

All content from Kiddle encyclopedia articles (including the article images and facts) can be freely used under Attribution-ShareAlike license, unless stated otherwise. Cite this article:
Scarborough Fair Collection Facts for Kids. Kiddle Encyclopedia.