Tilikum (c. December 1981 – January 6, 2017), nicknamed Tilly, was a captive killer whale who spent most of his life performing at SeaWorld Orlando. He was captured in Iceland in 1983 at Hafnarfjörður, near Reykjavík. About a year later, he was transferred to Sealand of the Pacific in Victoria, British Columbia. He was subsequently transferred in 1992 to SeaWorld in Orlando, Florida. He sired 21 calves, of which ten are still alive as of 2017.

Tilikum was heavily featured in CNN Films' 2013 documentary Blackfish, which claims that killer whales in captivity suffer psychological damage and become unnaturally aggressive.' Tilikum was involved in the deaths of three people: Keltie Byrne – a trainer at the now-defunct Sealand of the Pacific, Daniel Dukes – a man trespassing in SeaWorld Orlando,' and SeaWorld trainer Dawn Brancheau. 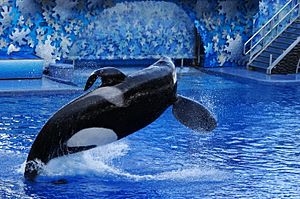 Tilikum was captured when he was two years old, along with two other young killer whales, by a purse-seine net in November 1983, at Berufjörður, Iceland. After almost a year in a tank at the Hafnarfjördur Marine Zoo, he was transferred to Sealand of the Pacific, in Oak Bay, a suburb of the city of Victoria on Vancouver Island, Canada. At Sealand, he lived with two older female killer whales named Haida II and Nootka IV. As a result of their matriarchal social structure, Tilikum was abused by Haida II and Nootka IV who behaved aggressively towards him, including forcing him into a smaller medical pool where trainers kept him for protection.

Tilikum returned to performing on March 30, 2011. High-pressure water hoses were used to massage him, rather than hands, and removable guardrails were used on the platforms, as OSHA has restricted close contact between orcas and trainers and reinforced safety precautions on the workplace after Dawn Brancheau's death. He was paired with his grandson Trua and was often seen performing alongside him during the finale of the new One Ocean show. He had on occasion been kept with his daughter Malia, or both Trua and Malia at the same time. In December 2011, he was put on hiatus from the shows following an undisclosed illness. He resumed performing in April 2012.

Tilikum had 21 offspring in captivity, 11 of which were alive as of November 2013.

While at Sealand of the Pacific, Tilikum sired his first calf when he was about eight or nine years old. His first son, Kyuquot, was born to Haida II on December 24th, 1991. Just a few months prior to the birth of Kyuquot, Tilikum was involved in the first incident involving a death. Seaworld requested an emergency transfer of Tilikum to their facility.

Following his arrival at SeaWorld, Tilikum sired many calves with many different females. His first calf born in Orlando was to Katina. Katina gave birth to Taku on September 9th, 1993. Taku died on October 17th, 2007.

In 1999, Tilikum began training for artificial insemination (AI). In early 2000, Kasatka who resided at SeaWorld San Diego was artificially inseminated using his sperm. She gave birth to Tilikum's son, Nakai, on September 1st, 2001. On May 3rd, 2002, another female in San Diego, named Takara, bore Tilikum's calf through artificial insemination. Tilikum was also the first successful, surviving grandfather orca in captivity with the births of Trua (2005), Nalani (2006), Adán (2010) and Victoria (2012–2013).

SeaWorld announced in March 2016 Tilikum's health was deteriorating, and it was thought he had a lung infection due to bacterial pneumonia, a common cause of death in captive and wild whales and dolphins. In May 2016, it was reported Tilikum's health was improving. On January 6th, 2017, SeaWorld announced that Tilikum had died early in the morning. The cause of death was reported as a bacterial infection.

All content from Kiddle encyclopedia articles (including the article images and facts) can be freely used under Attribution-ShareAlike license, unless stated otherwise. Cite this article:
Tilikum (killer whale) Facts for Kids. Kiddle Encyclopedia.