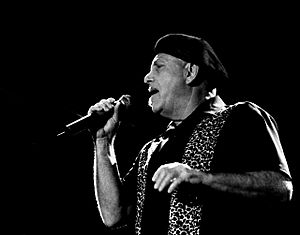 Timothy DuPron "Tim" Hauser (December 12, 1941 – October 16, 2014) was an American singer. He was best known for being a member of the vocal group The Manhattan Transfer. He was a founding member of the group in 1969. The group has won ten Grammy Awards.

Hauser was born in Troy, New York and grew up in the coastal region of Jersey Shore, New Jersey. Both (two) his marriages ended in divorce. He had two children: son, Basie, and daughter, Lily.

Hauser died from cardiac arrest and pneumonia on October 16, 2014 in Sayre, Pennsylvania. He was 72.

All content from Kiddle encyclopedia articles (including the article images and facts) can be freely used under Attribution-ShareAlike license, unless stated otherwise. Cite this article:
Tim Hauser Facts for Kids. Kiddle Encyclopedia.