Toddy is a powdered milk drink manufactured by PepsiCo. As of today, it is mainly marketed and sold in Argentina, Brazil and Venezuela, but in the 1950s-1960s it was sold as a canned beverage and marketed towards residents of the United States, especially at drive-in movie theaters where it was advertised with the cartoon mascot "Rodeo Joe". 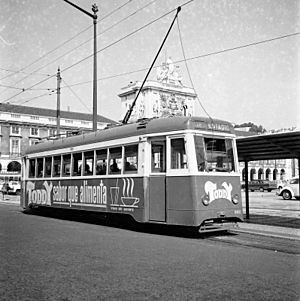 Toddy advertisement on a Lisbon tram in 1969.

Toddy was established in 1930 by Puerto Rican Pedro Erasmo Santiago combining the characteristics of two drinks: the Scotch Toddy (an egg yolk base of egg, honey, cream and whisky) and the Caribbean Rum Toddy, (a base of cacao, molasses and rum).

On March 15, 1933, Pedro Erasmo Santiago was licensed by the provisory government of Getúlio Vargas to commercialize the product in Brazil. He created innovative advertising campaigns, including skywriting the product name over the skies of Rio de Janeiro.

In the 1940s, Toddy began production in Venezuela, where it is still a very popular beverage.

Pedro Erasmo Santiago also commenced production of Toddy in Argentina, Portugal, Spain, and distributed the product in the Caribbean islands of Dominican Republic and Cuba. He also ventured into food processing activities, including fruit juices under the trademark Yukery. In Brazil the juice was called Yuky and in Venezuela Yukery.

As result of this venture into juice production, in the 1950s Pedro Erasmo Santiago established the largest orange juice processing and juice concentrate facility in the world, Suconasa, today Cutrale, established in Brazil.

After his death on February 8th 1966, his youngest son, Erasmo Julian Santiago Mejia, (August 12th 1936-February 12, 2008) took over the operations, later selling the companies in Venezuela due to pressure from the national government and banks in 1986.

The trademark was acquired by PepsiCo in 2001. PepsiCo updated the brand's logo to a star and three cows.

In 2009, PepsiCo introduced Toddy in Australia, and the following year in Chile.

Toddynho (a fusion of Toddy + Portuguese diminutive suffix -inho) is a line of pre-mixed chocolate milk products also manufactured by PepsiCo. It was launched in 1982, with children as the target audience. The drink is more well-known than the traditional Toddy, and is distributed in packages of 200 ml.

All content from Kiddle encyclopedia articles (including the article images and facts) can be freely used under Attribution-ShareAlike license, unless stated otherwise. Cite this article:
Toddy (PepsiCo) Facts for Kids. Kiddle Encyclopedia.