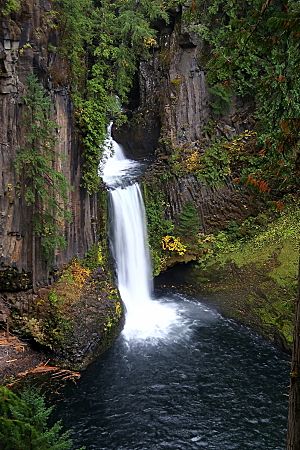 Toketee Falls is a waterfall in Douglas County, Oregon, United States, on the North Umpqua River at its confluence with the Clearwater River. It is located approximately 58 miles (93 km) east of Roseburg near Oregon Route 138.

Toketee (pronounced TOKE-uh-tee), is a Chinook Jargon word meaning "pretty" or "graceful". The falls was officially named by a United States Board on Geographic Names decision in 1916, over alternate names Ireland Falls and Toketie Falls.

With a reliable water flow on the North Umpqua River, the falls avoids the seasonal fluctuations of other creek-fed waterfalls in Oregon.

The waterfall is regulated by a dam built just upstream by PacifiCorp, which now regulates and reduces the water flow over the falls. The damming forms a reservoir called Toketee Lake. Previously the full volume of the North Umpqua River was allowed to flow over the falls, but the flow has been reduced by a penstock that utilizes the drop of the falls to generate hydroelectricity.

There was a Toketee Falls, Oregon post office from 1952 to 1956 during the construction of the PacifiCorp hydroelectric plant.

All content from Kiddle encyclopedia articles (including the article images and facts) can be freely used under Attribution-ShareAlike license, unless stated otherwise. Cite this article:
Toketee Falls Facts for Kids. Kiddle Encyclopedia.