In this Japanese name, the family name is Tokugawa. 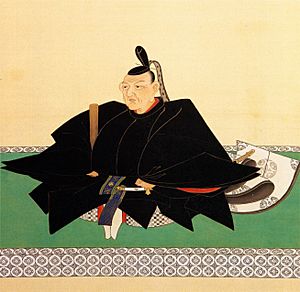 Yoshimune was the eighth shogun of the Tokugawa shogunate.

Yoshimune's government worked to control the price of rice. This earned him the nickname "Rice Shogun" or "Shogun of Rice" (kome-shōgun).

The hollyhock symbol of the Tokugawa family.

All content from Kiddle encyclopedia articles (including the article images and facts) can be freely used under Attribution-ShareAlike license, unless stated otherwise. Cite this article:
Tokugawa Yoshimune Facts for Kids. Kiddle Encyclopedia.