Thomas Edward "Tom" Bosley (October 1, 1927 – October 19, 2010) was an American actor. Bosley is known for his role as Howard Cunningham in Happy Days. He also starred in roles in Murder, She Wrote and Father Dowling Mysteries. He starred in the Broadway musical Fiorello! that earned him a Tony Award.

Bosley was born on October 1, 1927 in Chicago, Illinois, the son of Dora (née Heyman) and Benjamin Bosley. Although well known for playing a Catholic priest-and numerous Protestants-Bosley was actually Jewish. During World War II, Bosley served in the United States Navy. While attending DePaul University, in Chicago. In 1947 Bosley's stage career began in Our Town with the Canterbury Players at the Fine Arts Theatre. Bosley performed at the Woodstock Opera House in Woodstock, Illinois, in 1949 and 1950 alongside Paul Newman.

Bosley played the Knave of Hearts in a Hallmark Hall of Fame telecast of Eva Le Gallienne's production of Alice in Wonderland in 1955. But his career began in a stage role based on New York City mayor Fiorello H. La Guardia in the long Broadway musical Fiorello! (1959), for which he won a Tony Award. In 1994, Bosley originated the role of Maurice in the Broadway version of Disney's Beauty and the Beast. Bosley also toured as Cap'n Andy in Harold Prince's 1994 revival of Show Boat.

His first movie role was in 1963, as would-be suitor of Natalie Wood in Love with the Proper Stranger. Other movies include; The World of Henry Orient, Divorce American Style, Yours, Mine and Ours, Gus and the television movie The Triangle Factory Fire Scandal. Bosley shared a heartfelt story about his life during the Holocaust in the documentary movie Paper Clips.

Among his early television appearances was in the 1960 CBS summer replacement series, Diagnosis: Unknown, with Patrick O'Neal. In 1962, he played Assistant District Attorney Ryan in the episode "The Man Who Wanted to Die" on James Whitmore's ABC legal drama The Law and Mr. Jones. In 1969, he appeared in a comedy episode from The Virginians.

Happy Days and other notable movie and television roles 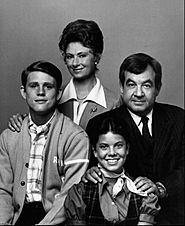 Bosley (top right) with the "Cunningham Family" in Happy Days, 1974

Bosley also starred in the 2008 Hallmark Channel television movie Charlie & Me. In 2010, he appeared in The Backup Plan starring Jennifer Lopez, which was his last movie before his death. 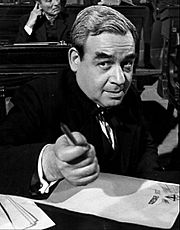 During the 1970s and 1980s, Bosley did several commercials for the Glad Sandwich and Garbage Bags.

Bosley did radio commercials for the new Saturn Car Company a "different kind of car company," in 1990.

Later in life he was the television spokesman for SMC (Special Merchandise Corporation), a national wholesaler and dropshipper.

Bosley was also the "face" of LifeBack USA helping bring the benefits of Life Settlements to seniors, having himself sold an unwanted life insurance policy during his later life.

In a 1997 of The Simpsons, Homer claims to have been the son of Tom Bosley. Homer and Marge are going to their high school reunion:

Homer: It'll be great to see the old gang again. Potsie, Ralph Malph, and the Fonz.

Margie: That wasn't you, that was "Happy Days"!

Homer: No, they weren't all happy days. Like the time Pinky Tuscadero crashed her motorcycle, or the night I lost all my money to those card sharks and my dad Tom Bosley had to get it back.

Bosley was married to Jane Eliot from 1962 until they divorced in 1978. Later in 1980 Bosley married Patricia Carr until his death in 2010. Bosley had a daughter Amy Bosley.

Bosley died on October 19, 2010, at a hospital in Rancho Mirage, California from heart failure complicated by Staphylococcal infection. He was 83 years old. Bosley had lung cancer. His remains are buried at Forest Lawn Memorial Park in Hollywood Hills, California.

All content from Kiddle encyclopedia articles (including the article images and facts) can be freely used under Attribution-ShareAlike license, unless stated otherwise. Cite this article:
Tom Bosley Facts for Kids. Kiddle Encyclopedia.