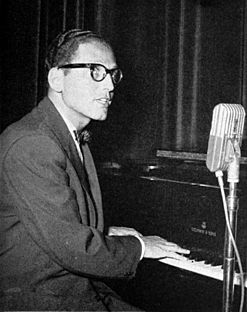 Tom Lehrer (born 9 April 1928), also known as Thomas Andrew Lehrer, is an American singer-songwriter, pianist and mathematician. Lehrer is known for his comic songs which were written in the 1950s and 1960s. His career was short, as he retired in the 1970s, in order to focus on teaching mathematics at Harvard University. His most known songs are "Poisoning Pigeons in the Park", and The Elements, where Lehrer sung all the elements in the periodic table (at that time), to the tune of the Modern Major General, a song that was written by Gilbert and Sullivan for the stage show The Pirates of Penzance.

He released a few albums in his years of work, which were split from recordings from live concerts, to just studio versions, recorded without an audience. The first one of these albums was released in 1953, and the last was released in 1965, (minus a stereo rerecording of the first album, and the releasing of 'Songs and More Songs by Tom Lehrer' in 1996, which put two albums together, including a few more songs. These albums are as follows:

Lehrer earned his AB in Mathematics in 1946, and an MA degree the following year.

All content from Kiddle encyclopedia articles (including the article images and facts) can be freely used under Attribution-ShareAlike license, unless stated otherwise. Cite this article:
Tom Lehrer Facts for Kids. Kiddle Encyclopedia.