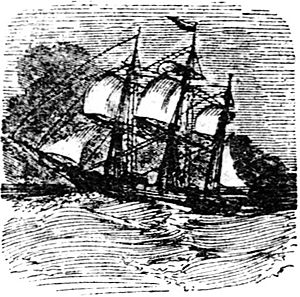 Engraving for "S is a large Ship."

It was advertised in many publications, including The consumptive's guide to health, Americans warned of Jesuitism, and others.

Tom Thumb's Picture Alphabet is considered one of several schoolbooks of the early 19th century in competition, during a period where there was a great expansion of educational books for children made available. A review from the School Library Journal is mixed, saying that while some of the book provided "a tidy sentence for each letter," other words used in the rhyme schemes would either be unfamiliar to many children, or they would "stretch to rhyme."

Tom Thumb's Picture Alphabet has been republished and reprinted many times, by publisher's such as Kiggins and Kellogg. A version published by Scholastic in 2002 includes new illustrations by Tiphanie Beeke, which appears in Treasury Of Alphabets.

All content from Kiddle encyclopedia articles (including the article images and facts) can be freely used under Attribution-ShareAlike license, unless stated otherwise. Cite this article:
Tom Thumb's Picture Alphabet Facts for Kids. Kiddle Encyclopedia.