Torreya californica is a species of conifer endemic to California, occurring in the Pacific Coast Ranges and the foothills of the Sierra Nevada. It is commonly known as California torreya or California nutmeg tree (although not closely related to true nutmeg).

California nutmeg is an evergreen tree growing to 15–25 m tall, with a trunk diameter of 0.5–1 m (exceptionally 2 m); the crown is conical in overall shape, with whorled branches. The leaves are needle-like, stiff, sharp pointed, 3–5 cm long and 3 mm broad; they are arranged spirally, but twisted at the base to lie flat either side of the shoots.

The male (pollen) cones are 5–7 mm long, grouped in lines along the underside of a shoot. The female (seed) cones are single or grouped two to five together on a short stem; minute at first, they mature in about 18 months to a drupe-like structure with the single large nut-like seed 2.5–4 cm long surrounded by a fleshy covering, dark green to purple at full maturity in the fall.

The seeds were used by Native Americans in Northern California as food. The seeds were once mentioned in pharmacognostic literature under the Latin name nux moschata Californica. The wood was used for making bows.

The wood is sometimes used in making Go game boards, as a cheaper substitute for the prized kaya (Torreya nucifera) of Japan and Southeast Asia.

The tree is planted as a specimen ornamental tree in gardens; and in groves in larger native plant and traditional landscape projects. 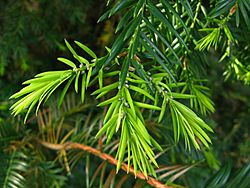 Torreya is named for Dr. John Torrey (1796-1873), an American botanist who contributed to the Flora of North America.

All content from Kiddle encyclopedia articles (including the article images and facts) can be freely used under Attribution-ShareAlike license, unless stated otherwise. Cite this article:
Torreya californica Facts for Kids. Kiddle Encyclopedia.