A game of Go

Go is a board game for two players. It is called Wei-k'i (or Wei-chi) in Chinese, Patok or Baduk in Korean and I-go in Japanese.

Go is played on a board with black and white game pieces called stones. Players take turns placing a stone of their color on intersections of a 19x19 square grid. The player with the black stones goes first. A normal Go board has 19 rows and columns of lines. Some players use 9x9 or 13x13 boards too, such as new players, because smaller boards usually mean shorter, less complex games.

A game of Go ends when both players pass their turns without playing. This usually happens when adding another stone to the board doesn't change the score. The winner is the player whose stones surround more empty intersections (points), along with captured stones and komi (extra points added to the score of the player using the white stones because the player with black stones has the advantage of going first). A game can also end when a player gives up and resigns if they don't think they can win.

In a game against a skilled player, a less skilled player may be given a "handicap" of extra stones on the board at the start of the game as well as playing black. These rules help make the game and final score fair for both players. 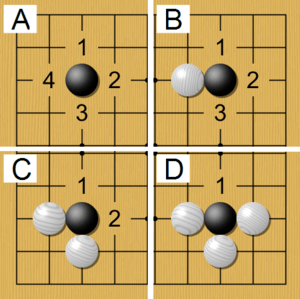 The four liberties (empty points that are up, down, left, or right) of a single black stone (A), as White reduces those liberties by one (B, C, and D). When Black has only one liberty left (D), that stone is "in atari". White may capture that stone (remove from board) with a play on its last liberty (at D-1). 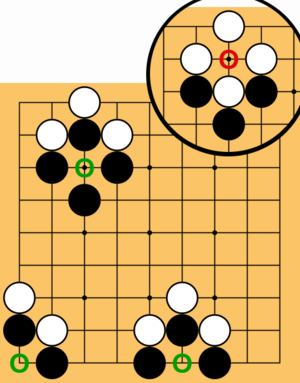 Examples of when the Ko rule applies. If white player puts a stone in the green circles and captures a black stone, the other player cannot capture the white stone right away - they must play somewhere else on the board first.

Besides the order of play (Black plays first, then White plays, then Black plays, and so on) and handicap or scoring rules, there are only two rules in Go:

Some Go teachers tell their students that the stones represent armies. If the armies don't have empty spaces to move into, they can't survive against the enemy armies. Therefore, stones of one color that are completely surrounded by another color are captured and removed from the board. This is the only time that a stone can be moved after a player puts it on the board. Stones share liberties, so that a group of stones are all "alive" as long as one stone is next to an empty intersection. Stones with no liberties (no access to empty space) are captured and removed from the board. At the end of the game, the prisoners are usually deducted from the score of the player who lost them.

The second rule is called Ko (eternity). You can place stones on any clear intersection you want, as long it isn't taken off right after, or the board looks the same all over as it did before. This is to stop the game from going back and forth capturing the same stones forever. Players must make a move somewhere else on the board during a "ko fight" before they can re-capture a stone in the same position.

Its original Chinese name is "围棋" (= wei qi or wei chi). It is also popular in Japan, and its common name "Go" comes from Japanese. In Korea the game is called "baduk". In these three countries the game is an important part of the culture, like chess is in many western countries.

Go and chess are both board games and strategy games, though both may be used as gambling games as well. They both have no luck or secret information, unlike some other classic games like backgammon (dice are rolled) or poker and other card games which also have secret information.

There are many places to play Go on the Internet, as well as local clubs and national organizations in many countries around the world. A 2016 survey by the International Go Federation (IGF) found that there are over 20 million players around the world. Most players live in East Asia.

Go was invented in China but the specific time is not known. Some say it was invented more than 2,500 years ago and is the oldest board game still played today. The historian of board games, H.J.R. Murray, said:

Its age is often exaggerated; contemporary references to it only become frequent under the Song dynasty in China (AD 960–1279). It is significant that Chao Wu King, who lived between 970 and 1127, records how he enlarged the existing Chinese chessboard by dividing it lengthwise and across to produce a board of 19x19 points on which [the game] is now played. The game spread to Korea and Japan, where the first masters whose names has been recorded flourished between 1465–1500.

All content from Kiddle encyclopedia articles (including the article images and facts) can be freely used under Attribution-ShareAlike license, unless stated otherwise. Cite this article:
Go Facts for Kids. Kiddle Encyclopedia.