Tower Hill Water Tower is a disused water tower and local landmark in Ormskirk, Lancashire, England. Situated on the east side of Tower Hill, it was built between 1853-4 for Ormskirk Local Board of Health, and is reputed to be the oldest remaining water tower in the country. It was awarded Grade II* listed status in 1976, and is on the Heritage at Risk Register. The area immediately surrounding the tower has been used as allotments since the mid 20th century. 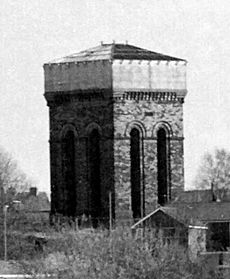 The tower in 1987, before the water tank was removed.

The tower is built in the Romanesque Revival style, constructed of coursed, squared sandstone, and arranged in a square plan. On each side are two narrow full-height Romanesque arches, all with stepped surrounds and arch-bands, and linked by an impost band. Above the arches is a plain frieze with carved grotesques at the corners, topped with machicolated corbelling. The stone is a pale red and mottled form of Ormskirk Sandstone, probably extracted from nearby Ruff Wood.

In its present state, the tower stands at a height of approximately 17 metres (56 ft). Originally, the stonework was surmounted by a metal water tank with a pitched slate-covered roof, which added an extra 6.2 metres (20 ft) to the height of the structure. Due to its poor condition, the tank was removed in the early 1990s.

All content from Kiddle encyclopedia articles (including the article images and facts) can be freely used under Attribution-ShareAlike license, unless stated otherwise. Cite this article:
Tower Hill Water Tower Facts for Kids. Kiddle Encyclopedia.