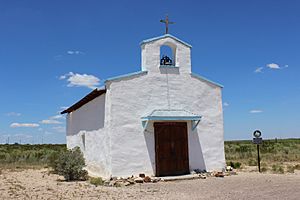 Toyahvale is an unincorporated community in southern Reeves County, Texas, United States. It lies along State Highway 17 and FM 3078 south of the city of Pecos, the county seat of Reeves County. Despite its similar name, Toyahvale is distinct from the town of Toyah, which lies 25 miles (40 km) to the north. Its elevation is 3,323 feet (1,013 m). Although Toyahvale is unincorporated, it has a post office, with the ZIP code of 79786.

Toyahvale's name is a portmanteau: its first half is of a local Indian word for "flowing water", combined with "vale". The community was established after 1884, but its first post office was not opened until 1894; the office closed in 1931, but reopened in 1933. Today, the community lies at the western end of the Pecos Valley Southern Railway and is the location of Balmorhea State Park.

According to the Köppen Climate Classification system, Toyahvale has a semi-arid climate, abbreviated "BSk" on climate maps.

All content from Kiddle encyclopedia articles (including the article images and facts) can be freely used under Attribution-ShareAlike license, unless stated otherwise. Cite this article:
Toyahvale, Texas Facts for Kids. Kiddle Encyclopedia.