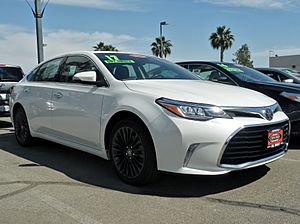 The 'Toyota Avalon is a car made by Toyota. It is a full-size car with four doors. As of 2013, the Toyota Avalon is available in the United States, Canada, Puerto Rico, South Korea, and the Middle East. It is named after Avalon, a legendary island from Celtic legends.

The car was first introduced as a 1995 model. It has sold over 1 million copies since it was introduced.

All content from Kiddle encyclopedia articles (including the article images and facts) can be freely used under Attribution-ShareAlike license, unless stated otherwise. Cite this article:
Toyota Avalon Facts for Kids. Kiddle Encyclopedia.