The Tramway Museum, St Kilda is Australia's principal museum of the 19th and 20th century trams of Adelaide, South Australia. It is situated at St Kilda, 24 km (15 mi) north of the centre of Adelaide. Most of the trams operate when rostered along a 1.6 km (1.0 mi) purpose-built track that runs between the museum and a large adventure playground. 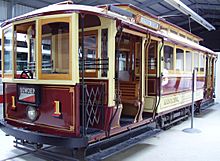 Tram no. 1, Adelaide's first electric tram, is one of 26 trams at the museum

The museum is operated by the Australian Electric Transport Museum (SA) Inc., a not-for-profit volunteer organisation affiliated with the Council of Tramway Museums of Australasia. It is dedicated to the study, restoration and operation of trams and trolleybuses that were used in Adelaide or built there. It is one of very few transport museums in the world holding at least one example of every principal tram type to have been in service on a city street system.

From an initial collection of five trams stored on a vacant site at St Kilda in 1957, the museum in 2019 had twenty-six electric trams, two horse trams, a tram-hauled horsebox, four trolleybuses, and a diesel bus of the type that operated when the street tram network was closed in 1958. Museum features include an entrance gallery, bookshop, archive and interpretative displays. Maintenance and construction facilities include two workshops, a wheel lathe building, ancillary storage sheds and a "travelling workshop", a former Melbourne W2 class tram.

Staffed by volunteers, the museum relies mainly on visitor admissions to fund its work. Major projects are supported by donations from museum members and occasional grants from South Australian Government museum assistance programs and the Salisbury Council. The council crucially secured funding from a 1972 state government unemployment relief scheme to lay a 1.6 km (1.0 mi) tramway from museum site alongside St Kilda Road towards the sea, and to erect poles for overhead wiring. The tramway opened for trials in 1973 and was officially opened on 23 March 1974 to coincide with St Kilda's centenary. Workshops were built to restore trams to operating condition; in 2001 the increasing number of trams necessitated a large building to house them.

In June 2019, regulatory approval of tram operations was withdrawn. In August 2020, the museum reported that it was continuing to upgrade the documentation of its safety management system; that process, combined with the closure required by the response to the COVID-19 pandemic, meant that it was likely to be some time before tram rides could resume. 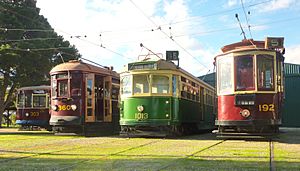 Visitors to the museum can experience free all-afternoon rides on trams that include Type G "Birney" no. 303, Type H ("Glenelg" or "Bay" tram) no. 360, Melbourne W7 Class no. 1013, and Type D no. 192. They will be among more than a dozen trams rostered for rides to St Kilda's large adventure playground when services resume.

The pre-electric era, from 1878 to 1917, is represented by horse tram no. 18 of the Adelaide and Suburban Tramway Company, the largest of 11 companies that operated more than 150 vehicles on a network of about 120 km (75 mi) of standard gauge lines. Displayed next to it is derelict tram no. 15 of the Adelaide, Unley and Mitcham Tramway Company, demonstrating the starting point for many restoration tasks.

The electric era, which started in 1909, was under the management of the MTT, a body established in late 1907 and governed mainly by councillors nominated by local governments. From then until 1958, when the street tram system was closed down, the trust had owned more than 300 trams and operated over a network of about 100 km (60 mi). There remained only the 10.8 km (6.7 mi) line from Glenelg to the geographic centre of Adelaide after 1958, about 85% of which occupied its own reserved corridor. It was to be another 47 years before a tramways renaissance began.

The museum owns at least one tram of each main type from the MTT era. Its collection also includes two Melbourne trams: one (W2 class 294) was built by Holden's Body Builders in Adelaide; the other (W7 class 1013) has been modified for convenient wheelchair access and offers an interesting comparison with the MTT's fast-loading Type F cars. A third fast-loader is a Sydney R1 Class tram, lent by the Sydney Tramway Museum.

All content from Kiddle encyclopedia articles (including the article images and facts) can be freely used under Attribution-ShareAlike license, unless stated otherwise. Cite this article:
Tramway Museum, St Kilda Facts for Kids. Kiddle Encyclopedia.