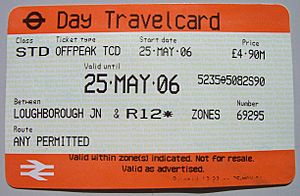 A Travelcard is a ticket used for most transport in London, including buses and the underground. The ticket is issued by Transport for London and National Rail and can be used on the services of either.

Before Travelcards were used, travellers in Greater London had to pay every time they changed between London Transport's bus and Underground services. This was a problem as it led to delays while purchasing the next ticket.

One ticket for all transport in London was one of the key promises made in 1981 by the newly-elected Labour Greater London Council, headed by council leader Ken Livingstone. The policy, with the slogan "Just The Ticket", meant that only one ticket was needed for London Transport bus and Underground services. They also reduced the price of transport. The price cut was then ruled illegal, but the one pricing scheme was mostly a success and was extended during the 1980s and 1990s as new transport routes were opened in London.

The original "zonal" system was mainly in Greater London. The zone areas used both letters and numbers for the outermost zones such that bus availability ignored the letter while BR and Underground availability depended also upon the letter(s) - e.g. a Travelcard or Capitalcard valid in zone 3a (but not 3b or 3c) was valid on buses in zones 3a, 3b and 3c but only in zone 3a when used on the railway services.

A Travelcard entitles the holder to use the following modes of transport within Greater London:

Travelcards also entitle the holder to a 33% discount on some London River Services.

All content from Kiddle encyclopedia articles (including the article images and facts) can be freely used under Attribution-ShareAlike license, unless stated otherwise. Cite this article:
Travelcard Facts for Kids. Kiddle Encyclopedia.