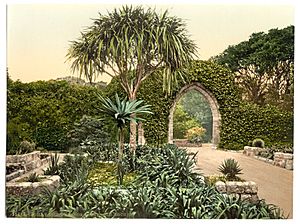 Tresco Abbey Gardens are located on the island of Tresco in the Isles of Scilly, United Kingdom. The 17 acre gardens were established by the nineteenth-century proprietor of the islands, Augustus Smith, originally as a private garden within the grounds of the home he designed and built. The gardens are designated at Grade I in the Register of Historic Parks and Gardens.

Augustus Smith chose Tresco as the site of his home because the site was more or less central in relation to the rest of the islands. It is also close to the original abbey ruins, is near a fresh water pool and overlooks the sand dunes and beach at Carn Near. The area at the time was barren land and the original building, designed by Smith and started in 1835, was small in comparison to the current building. He made additions to the house in 1843 and 1861. The Grade II listed house consists of roughly coursed granite with ashlar dressings and a slate roof. Some of the timbers from the 1861 wreck of the Award were used for the panelling and roof of the new dining room, as well as panelling of the rooms Annet, Rosevean and Rosevear. His successor, Thomas Smith-Dorrien-Smith, added the tower in 1891.

When Augustus Smith chose the area for his house and garden one of his first acts was to build a granite wall for shelter and to scatter gorse (Ulex europaeus) seeds. The seeds were brought from the mainland which suggests that the main gorse plant on the islands was western gorse (Ulex gallii) which, being a low growing plant, would not provide as much shelter. Within the gardens are the remains of a Benedictine abbey founded in 964 AD, although the majority of what remains today comes from the Priory of St Nicholas founded by monks from Tavistock Abbey in 1114. There were hardly any trees on the island and the gorse did not provide enough protection so he planted shelterbelts. The first were mainly deciduous trees such as, elm (Ulmus sp), sycamore (Acer pseudoplatanus), oak (Quercus sp) and poplar (Populus sp), and later he planted Monterey cypress (Cupressus macrocarpa) and Monterey pine (Pinus radiata) which are fast growing and suited to coastal conditions.

A large expansion to the collection was undertaken by Arthur Dorrien-Smith in the early years of the 20th century. He made many trips to South Africa looking for suitable trees and plants. He went on the 1907 Sub-Antarctic Islands Scientific Expedition, which had as its primary object magnetic observation in the Auckland and Campbell Islands. Following the expedition he travelled widely in New Zealand, as well as making a shorter visit to Australia. In 1909 he again visited Australia, New Zealand and the Chatham Islands, returning on SS Athenic. By this time he had amassed a total collection of plants and seeds of about 2280 specimens.

Because of the mild winter climate, the long hours of summer sunshine, and the high walls and hedges around the garden protecting it from the Atlantic winds, the garden is now home to exotic plants from all over the world: the Mediterranean, South America, South Africa and Australasia. 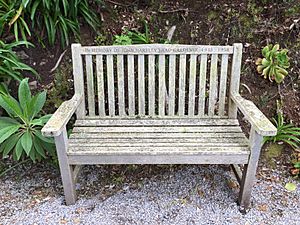 In 2012 five red squirrels were introduced into the Abbey Gardens. Only two survived so in 2013 the British Wildlife Centre in Surrey provided a new colony which was flown to Tresco by helicopter on a routine flight from RNAS Culdrose. 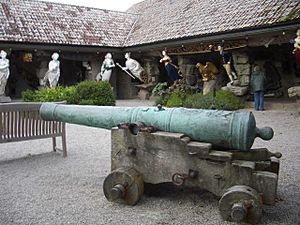 The Valhalla Museum within Tresco Abbey Gardens features the Valhalla Collection containing some 30 figureheads, as well as name-boards and other decorative carvings from the days of sail. The collection was started by Augustus Smith. Most of the figureheads date from the middle and end of the 19th century and come from merchant sailing vessels or early steamships that were wrecked on the Isles of Scilly. Some of the ships which are represented in the collection are:

All content from Kiddle encyclopedia articles (including the article images and facts) can be freely used under Attribution-ShareAlike license, unless stated otherwise. Cite this article:
Tresco Abbey Gardens Facts for Kids. Kiddle Encyclopedia.