In early times one group of islands was in the possession of a confederacy of hermits. King Henry I gave it to Tavistock Abbey which established a priory on Tresco; it was abolished during the Dissolution of the Monasteries. The priory was given the care of souls in the secular islands by the lord of the fief. In 1233, a prior here, known as Alan of Cornwall, was made Abbot of Tavistock.

The original name for the island (including Bryher) was the Cornish: Ryn Tewyn, meaning "promontory of sand-dunes". In 1193, when the island was granted to the Abbot of Tavistock by Pope Celestine III, the island was known as St. Nicholas's island, and by 1305 it is called Trescau (farm of elder-trees). By 1540 this has changed to Iniscaw (island of elder-trees). The island was named as Trescaw in an 1814 publication.

The island is administered for the Crown by the Duchy of Cornwall and is leased to the Dorrien-Smith estate, which runs it as a timeshare business. The Dorrien-Smith family (descended from Augustus Smith) held the position of Lord Proprietors of the Scilly Islands between 1834 and 1920.

From 2001 until 2009, the island hosted a marathon run organised in aid of Cystic Fibrosis. The course consists of 7½ laps around the island. The event is always held on the same day as the London Marathon. Past winners include Dara O'Kearney and Bob Brown. The Marathon has now been replaced with a Sprint Triathlon.

In 2007 a rebuild of the Abbey Farm/Shed area was completed; this area served as RNAS Tresco, a seaplane base during the First World War. The development included rental cottages, a swimming pool and spa and the Flying Boat Bar & Bistro.

In 2012 the Island Hotel was closed. Parts of the complex were converted into luxury holiday cottages; other parts of the hotel were demolished with new cottages built in its place. The Sea Garden Cottages now offer flexible accommodation with an on-site spa and tennis court. 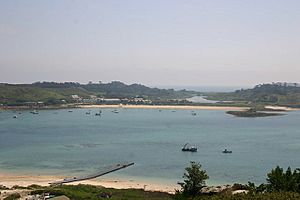 A variety of scenery is found on the island, including rugged granite outcrops, heathland of the exposed north coast and mainly shell beaches in the east and south. The variety of its scenery and geomorphology is partly a result of the last ice age, when the Devensian ice sheet clipped the north side of the island, leaving deformation till deposits.

The main settlements are New Grimsby and Old Grimsby in the central part of the island. Combined, their facilities include a convenience store (with a post office sub-branch), an art gallery, a pub, and two café/restaurants, all of which are owned and run by the Tresco Estate. At the south of the island are the sub-tropical Tresco Abbey Gardens, including the Valhalla Figurehead Collection, and Tresco Heliport. To the north of New Grimsby are King Charles's Castle and Cromwell's Castle. 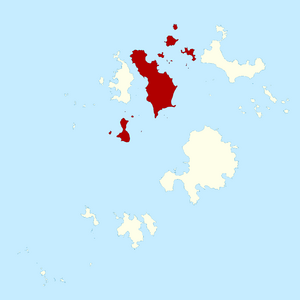 The Isles of Scilly comprising the civil parish and ward of Tresco, shown in red.

Tresco is one of the five civil parishes of the Isles of Scilly, which are also wards. The civil parish and ward covers much more than the island of Tresco: it includes uninhabited islands such as Samson (inhabited until 1855), Teän, St Helen's, Northwethel and Round Island. Tresco elects one councillor to the Council of the Isles of Scilly, the same as the other "off-island" wards. The civil parish is not functional, however, and there is no council or meeting.

These figures include permanent residents only. A large number of seasonal staff also reside on the island during the summer.

Unlike the other Scilly islands, Tresco is primarily run as a holiday resort, and virtually all activity and employment is tourist-related. On the other islands tourism is important, but does not dominate to the same extent. 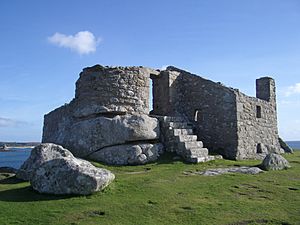 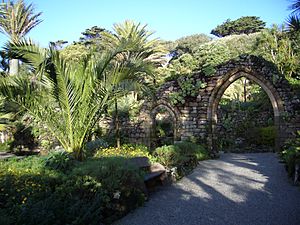 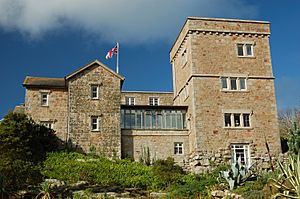 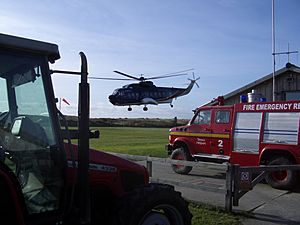 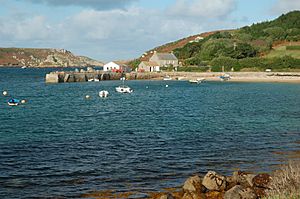 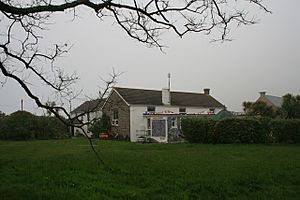 Five Islands Academy (previously Five Islands School) has its Tresco and Bryher Base, a primary campus in Tresco. Secondary pupils board at the St Mary's main campus, staying there on weekdays and coming back and forth to their home islands on weekends.

Tresco is a car-free island. Electric vehicles are used to transport overnight visitors to and from Tresco Heliport and from the various quays, and a few golf carts are available for disabled visitors.

Tresco Boat Services run passenger boat services to and from the other inhabited islands, as well as occasional circular sightseeing tours.

Tresco is unique amongst the off islands in that its habitat ranges from a windswept northern plateau with waved heath to sheltered bulb fields, wetland and lakes, to beautiful beaches backed by a sand dune system on the south coast. The forerunner of Natural England designated three Sites of Special Scientific Interest (SSSI) in 1971 and 1976. They are the Castle Down (Tresco) SSSI, Great Pool (Tresco) SSSI and Pentle Bay, Merrick and Round Islands SSSI. Castle Down is a SSSI for its waved maritime heath, its lichen flora, a breeding colony of Common Tern (Sterna hirundo) and for its geology. Great Pool is an SSSI because it is the largest area of fresh water in the islands and important for its breeding birds, and as a sheltering and feeding area for migrants. Pentle Bay is designated for the transition from a flora-rich sand dune system to lichen-rich heath.

In October 2012, four male and one female Red Squirrel (Sciurus vulgaris), on permanent loan from the British Wildlife Centre, were transported to Tresco by helicopter. Only two survived, but in September 2013 a further twenty were transported to Tresco and released in Abbey Woods, near the Abbey Gardens. Tresco is considered to be a ″safe haven″ for the endangered mammal as it is free from predators such as foxes, and from grey squirrels and the squirrel pox they carry. In June 2014, an unknown number of baby squirrels have been pictured in the Abbey Gardens, proving the squirrels are successfully breeding.

Among the many vagrant birds which have been found here, the following were firsts for Britain:

The island also briefly hosted the second British record of Great Blue Heron (Ardea herodias) in April and May 2015, which also visited both Bryher and St Mary's during its 23-day stay.

All content from Kiddle encyclopedia articles (including the article images and facts) can be freely used under Attribution-ShareAlike license, unless stated otherwise. Cite this article:
Tresco, Isles of Scilly Facts for Kids. Kiddle Encyclopedia.