Truman W. "True" Williams (March 22, 1839 – November 23, 1897) was an American artist known as the most prolific illustrator to Mark Twain's books and novels. He illustrated the first edition of The Adventures of Tom Sawyer (1876) and was thus the first to visually portray such characters as Tom Sawyer and Huckleberry Finn. He was also sole illustrator of Twain's Sketches, New and Old and primary illustrator of Roughing It and The Innocents Abroad. Working with a number of publishers he also illustrated works by writers Bill Nye, George W. Peck, Joaquin Miller, and others. He was also a notorious drunk, which slowed his work and made him unreliable. 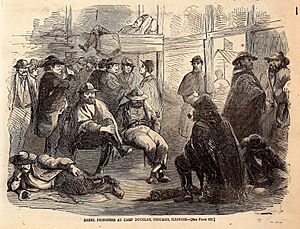 Truman W. Williams (his full middle name is unknown) was born on March 22, 1839, in Allegany County, New York, to parents Asa and Louisa Keelar Williams. Williams grew up in Watertown. Williams was a self-taught illustrator, and his talent appeared at a young age. One of his earliest published works appeared in Harper's Weekly in April 1862, illustrating Confederate prisoners of the Civil War. Williams later enlisted in a volunteer infantry unit in Illinois, serving from December 21, 1863, to October 9, 1865, during which he worked under General William T. Sherman as a topographical engineer. Williams was uninjured in service but later claimed a lifelong battle with painful varicose veins in his legs from "severe marching and hard service."

He began illustrating professionally in the 1860s: two of his illustrations appeared in an 1869 edition of Albert Deane Richardson's book Beyond the Mississippi, published by the American Publishing Company of Hartford, Connecticut. By 1870 was back in New York, when his work began appearing in the magazine Harper's Bazar and other New York publishers. 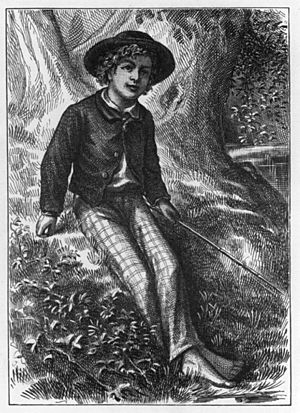 "Williams was a man of great talent—of fine imagination and sweetness of spirit—but it was necessary to lock him in a room when industry was required, with nothing more exciting than cold water as a beverage." - Albert Bigelow Paine

Williams' first work for Twain was The Innocents Abroad, of which he contributed the majority of illustrations. Biographer Albert Bigelow Paine calls Innocents "Twin's greatest book of travel", and writes: "we may believe that Williams was not a great draftsman, but no artist ever caught more perfectly the light and spirit of the author's text."

Literary critic Michael Patrick Hearn describes Williams as "an indifferent draftsman, his pictures varying from coarse to the highly sentimental". Regarding his work in Tom Sawyer, Warren Chappell writes "it is evident that Williams did not always take care in reading the text. As the first man to do the whitewashing scene, he carelessly used a rail fence instead of the board fence which is described."

In addition to his work with Twain, he illustrated an autobiography of P. T. Barnum and works by the likes of humorists George Wilbur Peck and Bill Nye, and his work appeared in Harper's Weekly and Harper's Bazaar. He wrote one book of his own, an adventure novel called Frank Fairweather's Fortunes, and edited a book of poems called Under the Open Sky. Both were released in 1890, and illustrated exclusively by Williams.

Williams married Carrie M. Heath April 19, 1884. She died on July 25, 1885, from tuberculosis and premature childbirth, and their premature son died shortly after. On July 27, 1886 Williams married Rose Heath, the younger sister of Carrie. They divorced in 1892 due to True's alcoholism, which included being drunk for a week or more. He died in Chicago, Illinois, from internal bleeding due to an aortic aneurysm on November 23, 1897, at the age of 58. 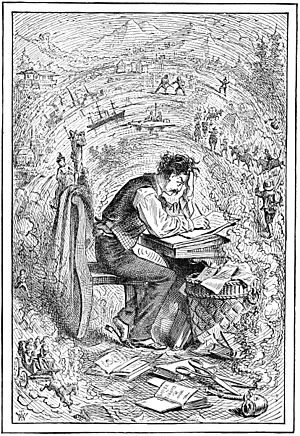 Mark Twain at work, from A Tramp Abroad

Works by other authors in which Williams was sole or contributing artist include:

All content from Kiddle encyclopedia articles (including the article images and facts) can be freely used under Attribution-ShareAlike license, unless stated otherwise. Cite this article:
True Williams Facts for Kids. Kiddle Encyclopedia.