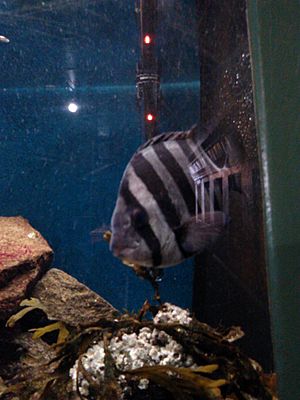 The tsunami fish is the surviving specimen of five striped beakfish that lived for more than two years in the partially submerged hull of the Japanese boat Sai-shou-maru (斎勝丸), after the boat broke loose and went adrift during the 2011 Tōhoku earthquake and tsunami. On March 22, 2013, the boat washed onshore in North America at Long Beach, Washington, more than 4,000 miles (6,400 km) from its starting point. The fish now lives in the Seaside Aquarium in Seaside, Oregon.

The Tōhoku earthquake occurred on March 11, 2011, and was the most powerful reliably measured earthquake in Japanese history. The resulting tsunami swept the 20 foot (6.1 m) Sai-shou-maru out to sea and inundated its storage compartments with seawater containing marine life, including several beakfish larvae. During the ensuing two year drift across the Pacific Ocean, the fish matured into juveniles. Scientists speculate that the fish were deposited into the ghost ship by sea waves either off the coast of Japan or Hawaii.

The boat was discovered beached on the Washington coast on March 22, 2013, its internal hold now forming an "aquarium" for the five beakfish as well as more than 30 plant and invertebrate species. Four were euthanized shortly after their discovery by the Washington Department of Fish and Wildlife, due to concerns that the warm-water fish could be an invasive species. The fifth was brought to the city hall in a bucket, after which the Seaside Aquarium agreed to add the fish to their collection. As of late 2013, the fish is on display at the aquarium.

All content from Kiddle encyclopedia articles (including the article images and facts) can be freely used under Attribution-ShareAlike license, unless stated otherwise. Cite this article:
Tsunami fish Facts for Kids. Kiddle Encyclopedia.