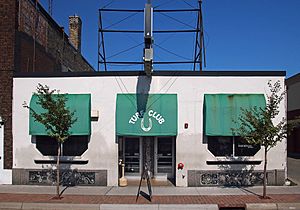 The Turf Club viewed from the south 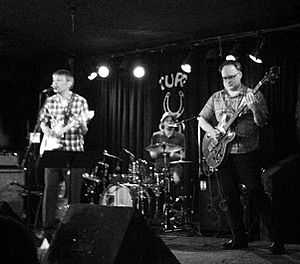 The Hang Ups performing at the Turf Club in 2013

The Turf Club is a bar, restaurant and music venue in Saint Paul, Minnesota, United States. Originally a dance hall in the 1940s, the Turf Club has since the 1990s been popular with Twin Cities bands, a sharp contrast to previous years when most local bands only played Minneapolis venues. The club has also become an important venue for national and international touring acts. Japanese indie-rock band Shonen Knife played its 1,000th show at the Turf Club.

The Turf Club was sold to the owners of First Avenue in late 2013. The venue has a capacity of about 350. The club's basement hosts a smaller bar and performance space, the Clown Lounge, which is used for jazz gigs. The Turf Club is located on the north side of University Avenue near Snelling Avenue and across the street from the Snelling Avenue light rail station on the Green Line. In 2014, the club received a substantial remodel, including an upgraded sound system and the return of a mural featuring five racehorses which had been forgotten, hidden behind curtains, for decades.

All content from Kiddle encyclopedia articles (including the article images and facts) can be freely used under Attribution-ShareAlike license, unless stated otherwise. Cite this article:
Turf Club (venue) Facts for Kids. Kiddle Encyclopedia.