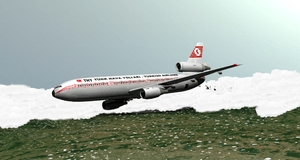 A CGI rendering of Turkish Airlines Flight 981, moments after failure of the cargo hatch, just before it crashed

Turkish Airlines Flight 981 was a regular flight operated by Turkish Airlines, from Istanbul to London Heathrow, with an extra stop in Paris. The aircraft was a McDonnell Douglas DC-10. On March 3, 1974, the airplane crashed into the Ermenonville Forest, shortly after it had left Paris. All 346 people on board were killed in the accident. An investigation after the crash found out that one of the cargo doors at the rear of the aircraft was not properly closed and secured. After takeoff, part of the door broke off and caused an explosion in the rear of the aircraft. The explosion also damaged cables needed to fly the aircraft. This meant that after the explosion, the aircraft could not be completely controlled.

An American Airlines DC-10 had experienced the same problem about two years earlier. At that time, the crew had managed to land the plane safely. On the ground it was discovered the rear cargo door had opened in flight. This caused damage to the fuselage but not the explosive damage in the case of Turkish 981. The two planes were also configured differently above the baggage compartment. There were three rows of seats added to Turkish 981 which added a greater load to the floor. When the cargo door blew out, the additional seats and passengers were ejected from the plane before the crash. Both planes experienced uncontrolled decompression when the cargo door latches failed. But Turkish 981 had additional damage to the plane that may have made it uncontrollable in flight.

An Airworthiness Directive was immediately issued by the Federal Aviation Administration (FFA). It called for strengthening the load floor and control cables. It also required improving the electrical wiring having to do with the cargo door.

After takeoff the plane reached an altitude of 11,000 feet (3,400 m) when the rear hatch cover blew off. The flight was over Coulommiers, France at the time. A rapid decompression caused the last two rows of seats to be sucked through a large hole in the plane. The plane remained in the air another 90 seconds while the pilots tried to regain control. It hit the ground at about 500 miles per hour (800 km/h) killing the 346 people onboard. The plane almost completely disintegrated.

All content from Kiddle encyclopedia articles (including the article images and facts) can be freely used under Attribution-ShareAlike license, unless stated otherwise. Cite this article:
Turkish Airlines Flight 981 Facts for Kids. Kiddle Encyclopedia.