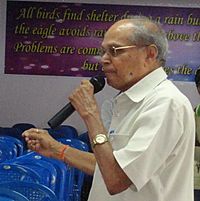 Turlapaty Kutumba Rao (1931 – 11 January 2021) was an Indian journalist and orator. He was known for his journalism in the Telugu language. He was said to have written 4,000 biographies and delivered over 16,000 public speeches which has been recorded by the Telugu Book of Records as a world record.

He was honored by the Government of India, in 2002, with the fourth highest Indian civilian award of Padma Shri making him the first journalist from the state of Andhra Pradesh to receive the award.

All content from Kiddle encyclopedia articles (including the article images and facts) can be freely used under Attribution-ShareAlike license, unless stated otherwise. Cite this article:
Turlapaty Kutumba Rao Facts for Kids. Kiddle Encyclopedia.