There were 222 households, out of which 27.0% had children under the age of 18 living with them, 30.2% were married couples living together, 9.0% had a female householder with no husband present, and 54.1% were non-families. 32.9% of all households were made up of individuals, and 1.8% had someone living alone who was 65 years of age or older. The average household size was 2.37 and the average family size was 3.38.

Arizona State Route 64, coming from Williams and U. S. Route 180, coming from Flagstaff serve Tusayan. They share a four-lane highway through town, which becomes two lanes outside the business district. The route designations then split south of town at Valle.

Groome Transportation serves Tusayan on its route from Flagstaff to Grand Canyon Village. 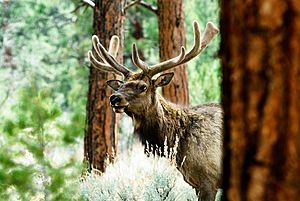 Elk near Tusayan, in the Kaibab National Forest, which surrounds the town.

The community first explored incorporation in the early 1990s. Legislation passed to allow it, but was challenged and defeated as unconstitutional because it applied only to Tusayan. In 2003, new legislation was passed allowing any community of 500 or more to incorporate if located in proximity to a national park or monument. The Tusayan-Grand Canyon Chamber of Commerce appointed a task force of community leaders who studied the issue for four years. In June 2007, they made a neutral presentation to the community, offering revenue projections and an overview of pros and cons. In April 2008, about 30 voters signed a petition to put the question of incorporation on the September 2, 2008, ballot. The measure was defeated by a vote of 78 to 62.

Another vote, held on March 9, 2010, proved more successful when the measure was approved by a margin of 116 to 71, making Tusayan the 91st incorporated place in the state of Arizona. An interim town council appointed by the Coconino County Board of Supervisors held the town's first council meeting on April 7. Opposition to the town's incorporation have filed a lawsuit to overturn the election as fraudulent, with opening arguments in the case being scheduled for April 14. 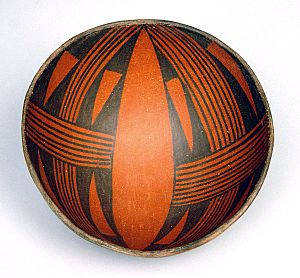 A Tusayan Black on Red bowl from Grand Canyon National Park. Tusayan Pueblo is the namesake for the town.

Tusayan is approximately two miles from the south entrance to Grand Canyon National Park. The town's businesses mainly serve tourists visiting the park although some local residents have shown interest in making the town itself a tourist destination.

All content from Kiddle encyclopedia articles (including the article images and facts) can be freely used under Attribution-ShareAlike license, unless stated otherwise. Cite this article:
Tusayan, Arizona Facts for Kids. Kiddle Encyclopedia.