Tweetsie Railroad is a family-oriented heritage railroad and Wild West amusement park located between Boone and Blowing Rock, North Carolina, United States. The centerpiece of the park is a 3-mile (4.8 km) ride on a train pulled by one of Tweetsie Railroad's two historic narrow-gauge steam locomotives. The park also features a variety of amusement rides, live shows, a zoo and other attractions geared towards families with children. The park also hosts a variety of special events throughout the year including their Halloween and Christmas themed events. 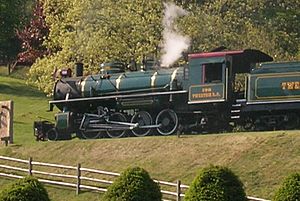 Opened on July 4, 1957, Tweetsie Railroad began as an excursion train ride pulled by coal-fired steam locomotive #12, the only surviving narrow-gauge engine of the East Tennessee and Western North Carolina Railroad (ET&WNC). Built-in 1917 by the Baldwin Locomotive Works, #12 is a 3 ft (914 mm) narrow gauge 4-6-0 coal-fired locomotive that ran from 1918 to 1940 carrying passengers and freight over the ET&WNC's 66-mile (106.2 km) line through the Appalachian Mountains from Johnson City, Tennessee to Boone, North Carolina. The name "Tweetsie" was given to the original ET&WNC by area residents who became accustomed to the shrill "tweet, tweet" of the locomotive whistles that echoed through the mountains. The nickname stuck with the railroad and its trains and became more identifiable than the railroad's official name. On February 9, 2017, Locomotive #12 celebrated its 100th Birthday. An official ceremony was held for the locomotive during Tweetsie Railroad's Heritage Weekend on August 26, 2017.

Two years after the 3 ft (914 mm) narrow-gauge portion of the ET&WNC ceased operations in 1950, the locomotive was purchased by a group of railroad enthusiasts and taken to Penn Laird, Virginia to operate as the Shenandoah Central Railroad, which opened in May 1953. Rains from Hurricane Hazel washed out the Shenandoah Central in October 1954, and Locomotive #12 was once again put up for sale. Cowboy actor and singer Gene Autry optioned the locomotive with the intent to move it to California for use in motion pictures. However, Autry ultimately determined that the transportation and restoration costs made his plan impractical.

Grover Robbins, an entrepreneur from Blowing Rock, North Carolina, purchased Autry's option and bought the locomotive in August 1955. Robbins moved the #12 locomotive back to its native Blue Ridge Mountains as the centerpiece of a new "Tweetsie Railroad" tourist attraction. One mile of track was constructed near Blowing Rock, North Carolina, and on July 4, 1957, the locomotive made its first public trip over the line. In 1958, the track was extended to a 3-mile loop around the mountain, and the trains at Tweetsie Railroad have traveled that circuit ever since. Grover Robbins' brothers, Harry and Spencer, were also involved with the operation of Tweetsie Railroad, and the park is still controlled and operated by the Robbins family.

In 1960, Tweetsie acquired another coal-fired steam locomotive, USATC S118 Class 2-8-2 #190, the "Yukon Queen" from Alaska's White Pass and Yukon Route. Also built by Baldwin Locomotive Works in 1943 for the US Army, the engine was part of an 11-locomotive fleet of "MacArthur" 2-8-2s originally purchased for use overseas. During World War II, the locomotives were sent to Alaska for use on the White Pass and Yukon. Locomotive #190 celebrated its 75th birthday in 2018.

Tweetsie Railroad became a popular tourist attraction, and quickly evolved into the first theme park in North Carolina—and one of the first in the nation. A western town and saloon were built around the original depot area. A train robbery and cowboy-and-Indian show were added to the train ride, playing off the Wild West theme that was very popular at the time on television and in movies. The theme was enhanced by regular visits from Charlotte's WBTV television personality/singing cowboy Fred Kirby, who hosted a popular children's show. In 1961, a chairlift and amusement ride area was constructed on the central mountain inside the rail loop, and over the decades the park has been expanded with additional rides, attractions, shops, zoo, and restaurants.

Tweetsie Railroad is open from early April through October, and on select nights in late November through December for the Tweetsie Christmas event. In addition to the Wild West train adventure and the amusement rides, Tweetsie Railroad has a variety of live entertainment shows featuring talented performers selected from the immediate area and from the Southeast. The park hosts numerous special events each season, including Letterland-themed days in May for school groups, visits by Thomas the Tank Engine, and a very popular nighttime "Ghost Train" Halloween event in October. In 2017, Tweetsie Railroad's 60th anniversary season, the park introduced the "Tweetsie Christmas" holiday-themed event.

In 1961, Grover and Harry Robbins built another train ride and tourist attraction called "Rebel Railroad" in the Smoky Mountains near Pigeon Forge, Tennessee. Originally featuring a Civil War theme, the park was renamed "Goldrush Junction" in 1966 and re-themed to a Wild West concept very similar to Tweetsie Railroad. The Robbins brothers sold Goldrush Junction in the late 1960s, and it subsequently went through various owners. In 1976, Jack and Pete Herschend of Branson, Missouri bought the Pigeon Forge facility and redeveloped it as "Silver Dollar City". In 1986, country music star Dolly Parton became a part-owner with the Herschends, and the theme park became today's Dollywood.

Tweetsie Railroad's Wild West themed operating season is from early April to the late October, The park is open weekends in the spring and autumn, as well as daily from Memorial Day weekend until mid-August. In addition, the park is open on Friday and Saturday nights in from late September through the month of October for the very popular "Ghost Train" Halloween event. The park then closes for daytime operations, then re-opens on Friday and Saturday evenings starting in late November for "Tweetsie Christmas", which runs through the month of December. Other special events are held throughout the season, including a large firework display on the Independence Day Fourth of July, and Railroad Heritage Weekend in August, which focuses on the history of Tweetsie Railroad's narrow gauge locomotives.

Tweetsie Railroad is located on US 321 between Boone and Blowing Rock, North Carolina.

Tweetsie Railroad also have their own locomotive workshop to maintain their two locomotives as well as overhauling other steam locomotives from several different amusement parks such as Walt Disney World, Busch Gardens, Six Flags and Dollywood.

Rides at Tweetsie Railroad include:

Other attractions at Tweetsie Railroad include the Tweetsie Palace Saloon and Diamond Lil's Can-Can Revue, other live shows, gold panning and gem mining, Deer Park zoo, a variety of specialty shops and food service locations, and a game arcade.

ET&WNC #12 is notable in the modeling world as being the prototype for the famous Bachmann "Big Hauler" G scale 4-6-0, which has been in production (with many revisions) since the 1980s and has long been one of the most popular models in the garden railroad hobby. Bachmann also produces an On30 scale version of the model.

All content from Kiddle encyclopedia articles (including the article images and facts) can be freely used under Attribution-ShareAlike license, unless stated otherwise. Cite this article:
Tweetsie Railroad Facts for Kids. Kiddle Encyclopedia.