Twin Bridges is a small unincorporated community on U.S. Route 50 near the Desolation Wilderness in El Dorado County, California. It is located 5 miles (8 km) west of Echo Summit, at an elevation of 6115 feet (1864 m). It has a population of 14 people according to census figures, however, as of 2008 the road sign lists the population at 10. Right after the town, the U.S. 50 eastbound starts a steep ascent to Echo Summit passing Sierra-at-Tahoe ski resort shortly before the summit.

When snow chains are required on the summit, Caltrans often establishes chain control in Twin Bridges. This is likely because of very limited availability of shoulders where chains can be installed on summit approaches.

The former ski area Edelweiss was just above Twin Bridges on US-50, at what is now called Camp Sacramento. It was the home hill for future Olympian ski racer Spider Sabich. He was raised in Kyburz, twelve miles (20 km) west, in the 1950s and early 1960s. 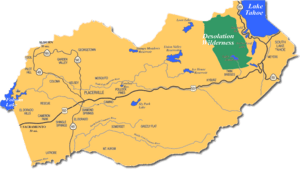 The population is 100% white; 50% male, 50% female. The average household size is 2 and the average family size is 2.2. There are 125 housing units which are largely unoccupied vacation homes. 100% of the population speaks the English language.

All content from Kiddle encyclopedia articles (including the article images and facts) can be freely used under Attribution-ShareAlike license, unless stated otherwise. Cite this article:
Twin Bridges, California Facts for Kids. Kiddle Encyclopedia.