US Airways facts for kids 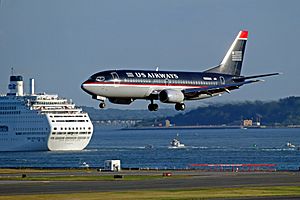 A US Airways Boeing 737 landing at Boston.

US Airways, Inc. was a airline that used to be owned by the US Airways Group, Inc. It was the sixth largest airline in the United States. Its headquarters were in Tempe, Arizona. US Airways owned 357 large jet aircraft and 329 smaller planes that flew to 240 places in North America, Central America, the Caribbean, Hawaii, and Europe. In May 2008, US Airways had 36,632 people working for them in the world and flew 3,512 flights each day. The US in US Airways stands for United States.

The airline also had the US Airways Shuttle. It's a brand which operates frequent flights between cities in the northeast part of the United States. Other companies operate short flights for US Airways, which are called US Airways Express. After the AA combination, the brand is now known as the "American Shuttle".

In 2005, US Airways combined with America West Airlines, but they kept the US Airways name.

All content from Kiddle encyclopedia articles (including the article images and facts) can be freely used under Attribution-ShareAlike license, unless stated otherwise. Cite this article:
US Airways Facts for Kids. Kiddle Encyclopedia.