U Škripcu facts for kids 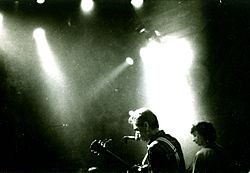 U Škripcu (Serbian Cyrillic: У Шкрипцу; trans. In Dire Straits) was a Serbian and Yugoslav rock band from Belgrade.

The band was created in 1980 by Zoran Vulović "Vule" (keyboards), Milan Delčić "Delča" (vocals) and Aleksandar Vasiljević "Vasa" (guitar), who later added Miloš Obrenović (drums) and Aleksandar Lukić (bass guitar) to the band, and to change the name of the band to U Škripcu. After the band became successful and popular around Yugoslavia with the release of the album O je! and EP Nove godine!, they failed to repeat this success, and so they disbanded in 1985.

In 1986, Vulović and Delčić re-created the band, but the latter soon left the band, so the new lineup, which included the vocalist Aleksandar Tabaš and various musicians, recorded the fourth studio album, U Škripcu. The album was not successful, so the band disbanded again in 1988. The next year, Vulović reunited with Delčić and Vasiljević, Lukić on guitar, bassist Dejan Škopelja, and drummer Ratko Ljubičić. They recorded the fifth studio album Izgleda da mi smo sami. After this, the band disbanded again. After this, Vulović became a producer and manager, Delčić pursued a solo career with his band Sklekovi, and Vasiljević and Lukić became a part of the supergroup Familija. In 2007, the original lineup came back together at the Delča i Sklekovi concert at the Belgrade Dom Omladine, which was released in 2008 as Ljubilarnih 20 i nešto godina - Live, under the moniker Delča a i U Škripcu. Delčić died of cancer on 24 July 2011.

All content from Kiddle encyclopedia articles (including the article images and facts) can be freely used under Attribution-ShareAlike license, unless stated otherwise. Cite this article:
U Škripcu Facts for Kids. Kiddle Encyclopedia.