Jugoton was the largest record label and chain record store in the former Yugoslavia based in Zagreb, SR Croatia.

Jugoton was created in 1947. It is notable for releasing some of the most important former Yugoslav pop and rock records. The company also owned a large network of record shops across SFR Yugoslavia.

After the break-up of Yugoslavia began, the company changed its name to Croatia Records in 1991.

Jugoton notable for signing numerous eminent former Yugoslav pop and rock acts. Some of the artists that have been signed to Jugoton include: 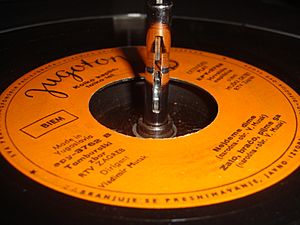 Jugoton also released the popular compilation album Paket aranžman. Many artists that represented Yugoslavia in the Eurovision Song Contest were signed with Jugoton, including the 1989 winners Riva.

Other major labels in the former Socialist Federal Republic of Yugoslavia were: PGP-RTB and Jugodisk from Belgrade; Suzy from Zagreb; Diskoton from Sarajevo; ZKP RTLJ from Ljubljana and others.

Jugoton, as an important part of the former Yugoslav culture is one of the subjects of Yugonostalgia.

An example of different kind is the online radio and web tv station called Jugoton which operates in the Yugoslav diaspora in Vienna, Austria. It plays music from the former Yugoslavia, but also from all the contemporary former Yugoslav countries, including pop, rock and folk. However, it is not formally related to the actual Jugoton, and not all the Yugoslav artists represented in its program were really signed to the label.

Yugoton is a Polish tribute album to the former Yugoslav rock scene released in 2001. Its title is a nod to Jugoton.

All content from Kiddle encyclopedia articles (including the article images and facts) can be freely used under Attribution-ShareAlike license, unless stated otherwise. Cite this article:
Jugoton Facts for Kids. Kiddle Encyclopedia.