The uncanny valley is a psychological theory about the effect involving art and robots and human emotions. As something starts to look more human-like, there is a point at which people start to feel it looks wrong. At this point, they have negative feelings toward the object. These feelings keep getting worse as the object is made to look more human-like. At a certain point, as the object starts to get very close to looking human-like, how people feel towards it tend to reverse and they have more positive emotional feelings towards it. The theory was created by the robotics professor Masahiro Mori in 1970. 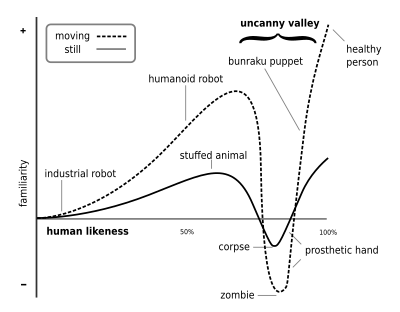 One of the main points of the theory to explain this is that people are not as affected in an emotional way by the object if it is easy to tell it is not human. After a certain point, people start to feel emotionally about it, but feel negatively because it is so nonhuman. As it gets closer to looking human, they start to feel more positive emotions towards it. A graph of these feeling shows a valley. This is part of the reason for the naming of the theory.

All content from Kiddle encyclopedia articles (including the article images and facts) can be freely used under Attribution-ShareAlike license, unless stated otherwise. Cite this article:
Uncanny valley Facts for Kids. Kiddle Encyclopedia.